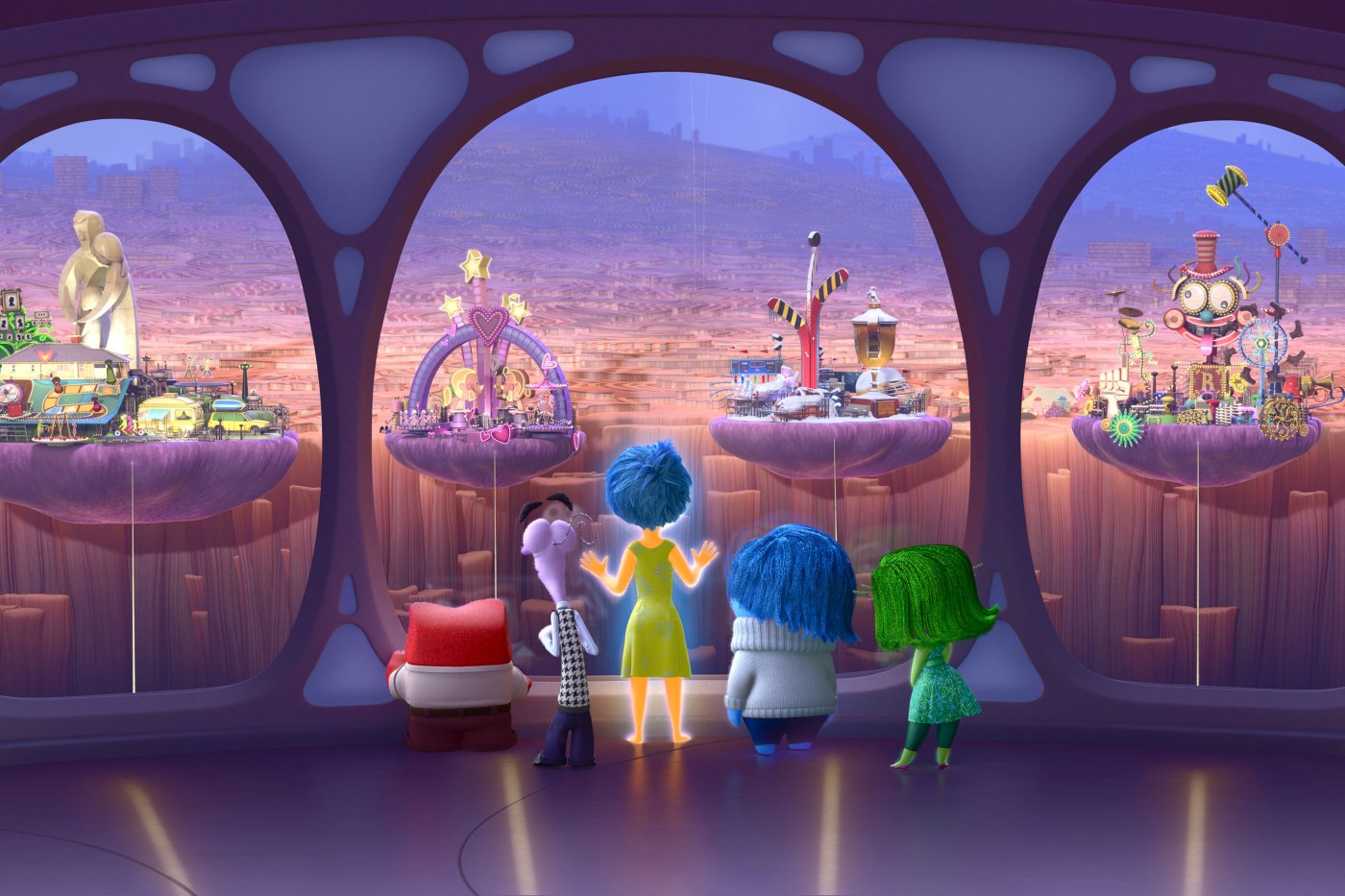 Pixar’s fifteenth animated feature film, Inside Out, is inarguably its most conceptual, ambitious, and distinctive; it may also be its greatest. The studio is known for its unique brand of emotional storytelling and blending of humor and heart, but generally the stories follow a familiar narrative structure. Inside Out transcends this trend by offering two parallel narratives taking place in disparate but related worlds. On the surface, the story follows the 11-year old Riley and her struggle with her family’s move from Minnesota to San Francisco, but more fundamentally shows Riley’s inner world: in her mind, we see five personified emotions which work together to guide her through her transition. The film magnificently marries these two worlds, as each element of the story, characters, and theme involves some aspect of one world informing the drama in the other. This synthesis is the true majesty of Inside Out, and establishes it among Pixar’s greatest offerings to date.

These features are apparent from the very beginning of the film, which serves almost as a prelude to teach the audience the concepts and rules of Inside Out. At Riley’s birth we see the genesis of our main character Joy, voiced by Amy Poehler, into Headquarters.  This is the control room where the emotions control Riley’s response to outside stimuli. At the beginning, Riley’s control panel consists of only a single button. When Joy presses the button, baby Riley emits her first laugh. It is adorable. Then, Sadness (Phyllis Smith) shows up, presses the button, and baby Riley starts crying. Within thirty seconds, Inside Out establishes these basic rules, introduces three other personified emotions (Anger, Fear, and Disgust, voiced by Lewis Black, Bill Hader, and Mindy Kaling respectfully), and fleshes out some more complex workings of Headquarters. We learn about core memories, which are so important that they generate Personality Islands – core traits that inform who Riley is as a person. The rest of this prologue shows Riley grow up until the day that Riley’s family leaves for San Francisco.

The emotions are all archetypal and elements of their design are aesthetically informative. As an example, Anger is red and brick-shaped whereas Disgust is green and meant to look like a broccoli floret. In addition, the emotions are not drawn with clear, distinct lines like the characters of the outside world. Instead, they seem to buzz at their edges with mental energy, representing that these emotions are ephemeral constructs. It is a beautiful way to make a visual distinction between the two worlds, and is a stroke of absolute genius.

Story-wise, the inciting incident of the film involves Riley introducing herself to her class at the beginning of her first day of at her school. While it is occurring, Joy calls up some of her core memories of Minnesota, but Sadness accidentally touches them and colors them blue. This focuses Riley’s thoughts on the sad elements of her moving, and she becomes embarrassed when she starts crying in front of the class. This leads to the generation of a new core memory – a fundamentally sad (and thus, blue) one. In the resulting disagreement between Joy and Sadness, they accidentally get removed from Headquarters and take the core memories with them. This both prevents Joy and Sadness from running the control panel at all, and disrupts the Personality Islands – resulting in Riley becoming emotionally stunted and almost inoperative. Joy and Sadness must return the core memories to Headquarters to restore normality to Riley’s mind.

This journey takes Joy and Sadness through various areas of Riley’s mind, which are both incredibly fun and genuinely serve the plot. We see long-term memory, where memories are stored. Sometimes they begin to fade, prompting a couple of helpers to dispose of them. These same helpers also intermittently send a jingle for a gum commercial up to Headquarters, making them responsible for the “this song is stuck in my head” phenomenon. We get to see abstract thought, which is both horrifying and hilarious, and Imagination Land, where all sorts of weird things pop up. These places are all visited as Joy and Sadness are trying to reach one of the Personality Islands, which contain a connection to Headquarters. Unfortunately, without the core memories to fuel them, the Islands begin to collapse into the void, forcing Joy and Sadness to race to the next one before they are all gone. The relationship between events occurring in the outside world and the collapse of Riley’s Personality Islands is incredibly moving, and you begin to fear Riley’s transformation from a vivid young girl into an emotionally stunted husk.

In fact, remarkably, both the characters in the outside world and the world inside Riley’s mind possess these kinds of engrossing character arcs. While this is expected for our human characters, it truly is amazing that the creators were able to imbue these anthropomorphized emotions with enough nuance that we can appreciate and empathize with their journey. Joy, who is established as the leader and feels that it is her job to keep Riley happy at all costs, must learn that each emotion is important in its own way. Sadness needs to learn that she has a place in Riley’s life, and that she doesn’t just ruin good things. Another character, Riley’s imaginary friend Bing Bong, is similarly engaging, fleshed-out, and affecting. The film is absolutely stuffed with impressive characters and visuals, and it is a joy to watch.

Inside Out will soon take its place among Pixar powerhouses like Toy Story 3 and Up on the back of its narrative strength, engrossing, complex characters and beautiful themes. It manages to effortlessly combine parallel stories into a multilayered exploration of how our emotions can affect the way we look at the world. Throughout the film, we are transported back to some of our own core memories as we remember the formative scenes from our own lives. It also details the importance of not forcing yourself into feeling one emotion or another. Instead, Inside Out champions genuine relationships and emotions and reminds all of us to be more faithful and honest with the way we are feeling – both to ourselves and our loved ones. Unlike so many other movies released this summer, this is a film with the power to actually inspire us to become better people. For that, it receives my highest praise: a new core memory of when I first experienced this stunning film.