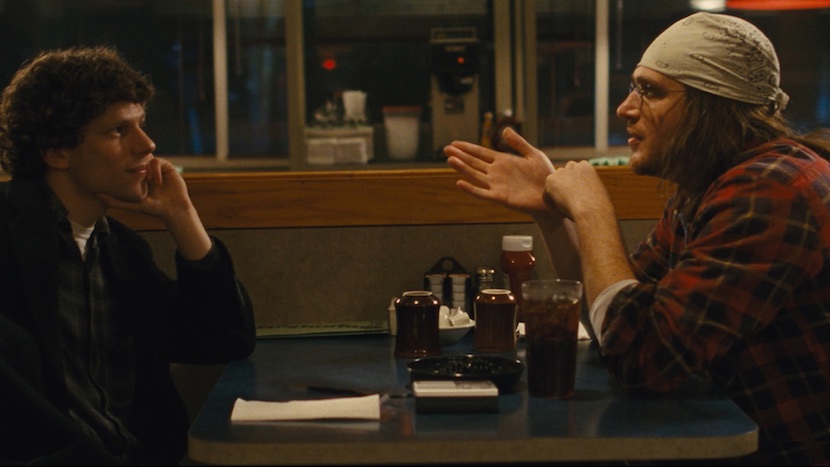 On September 12th, 2008, novelist David Foster Wallace committed suicide.  Most famous for his seminal novel Infinite Jest, Wallace’s death reverberated throughout the literary community.  Fellow writer David Lipsky reels at this news, as Lipsky had interviewed Wallace for Rolling Stone over a period of twelve days at the end of Wallace’s book tour for Infinite Jest.  James Ponsoldt’s The End of the Tour begins here, with Lipsky unearthing the shelved tapes from these interviews in an effort to revisit “the best conversation [he’s] ever had”.

Since the film leans on dialogue and characterization, much of its success is on the strength of the lead performances from Eisenberg and Segel.  Eisenberg plays Lipsky as a bashful sycophant in that he is aware of the extent of his reverence, but still manages to challenge Wallace on particular points.  Generally, Eisenberg succeeds most when he plays a more Type-A, “smartest man in the room”  character,  as we have seen in The Social Network or even something like Now You See Me.  It is a slight shift to see him as a more subservient, controlled character, but he is certainly one of the best parts of the film.

The absolute best part of the film, though, is demonstrably Jason Segel’s portrayal of David Foster Wallace.  Those familiar with the other works of Segel often charge the actor with “playing himself” and falling back on comfortable character traits.  Whether you are talking about his nine-year stint on How I Met Your Mother, various Apatow flicks like Knocked Up, or even his own passion projects like The Muppets, Segel is rarely lauded for his acting.  As a rule, these criticisms are no longer valid.

Jason Segel owns this film.  He has appropriated the cadence of Wallace, and absolutely inhabits the character.  Whenever he is on the screen, your attention is drawn to him, which serves to place the audience in the same position as Lipsky – hanging on Wallace’s every word.  His robust stream-of-consciousness flows freely, and touches on fascinating subjects which help to steer the theme of the film towards complex concepts like the double-edged nature of fame, the power of the written word and ideas in general, and the desire of the media to fit a story into an easy box.

Appreciation for The End of the Tour will likely be related to the extent that one enjoys philosophical discussions and other such intellectual pursuits.  Some viewers will likely balk at the film from that perspective, much as the more thinky films of Richard Linklater happen to rub them the wrong way.  I am a bit of a sucker for films of this nature, especially when they are executed with the talent apparent in this film.  Admittedly, the plotting lacks much depth and hinges heavily on the power of the performances from Eisenberg and Segel.  Still, there are inspiring moments in the film, and I think overall it warrants a viewing from those who are interested at the prospect of picking the brain of a great writer.

David Lipsky’s piece never appeared in Rolling Stone until Wallace’s death, when Lipsky wrote a moratorium called “Getting to Know David Foster Wallace”.  In that piece,  Lipsky wrote, “We think a thousand things at a time, and David found a way to get all that across in a way that’s incredibly true and incredibly entertaining at the same time.”  And, while “incredibly true and incredibly entertaining” may be an exaggerated descriptor for The End of the Tour, the film nonetheless conjures the same reverence for David Foster Wallace and his work.

So, readers, what did you think of The End of the Tour?  Were you even aware that this was a thing, and if you weren’t do you think it is something you’d like to seek out based on this review?  The film is available to stream to Amazon Prime members, which is how I saw it, so if you’re at all intrigued, I suggest you give it a try.  As always, if you liked the review or I somehow convinced you to seek out this movie, press your favorite little share buttons on the bottom and spread the word!

3 thoughts on ““The End of the Tour” Gives Us a Great David Foster Wallace, and a Solid Conversation”