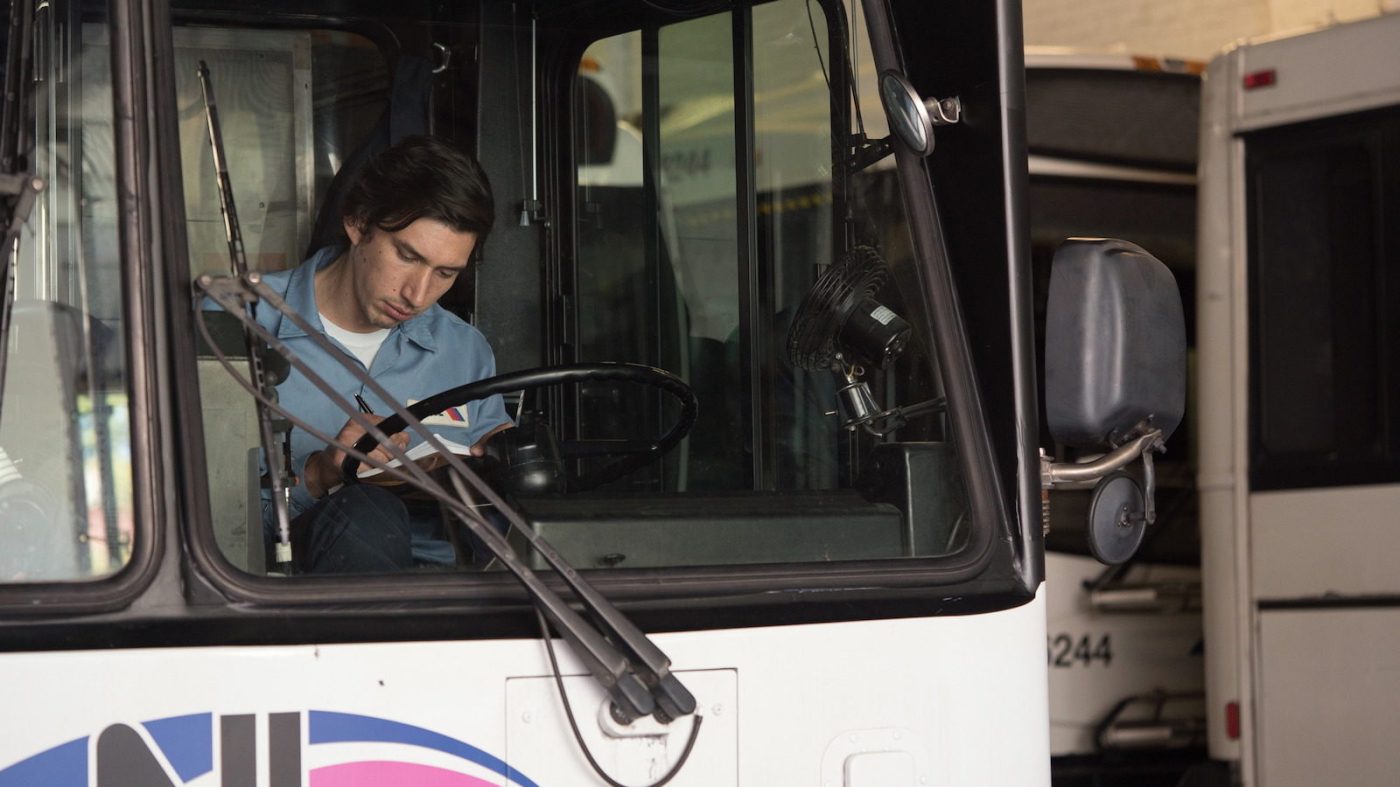 Paterson follows a week in the life of Paterson (Adam Driver), a bus driver in Paterson, New Jersey.  Paterson’s life traces a banal routine:  wake up at 6:15 (without an alarm), walk to work, drive a bus, come home to his live-in girlfriend, eat dinner, walk the dog, stop at a bar, have a drink, go to sleep.  Paterson spends his free time writing poetry, drawing inspiration from the beauty ensconced in this mundanity.  The film is almost plot-less, focusing more on imagery, rhythm, repetition, and tone to convey its themes.

In Paterson, Jim Jarmusch takes the techniques of the written word and adapts them to the screen in a brilliant ode to the artistry of poetry.  The film is structured into seven days, suggesting a stanza-like organization.  Each day has a rhythm to it as Paterson goes about his routine.  His interactions with others feel significantly repetitious and exhibit a similarity that feels like a cinematic version of rhyming.  And to drive it all home, when Paterson is composing his poems, Driver recites the words as they appear on the screen one at a time.  Here, Paterson explicitly becomes what it has always been:  both film and poem, an epic contemplation of the everyday beauty of life.

Each of Jarmusch’s seven stanzas begins with a title card (“Monday” through “Sunday”), with Paterson laying asleep next to his girlfriend Laura (Golshifteh Farahani).  The sameness of each day comes from the rhythmic structure that I have laid out before, but the specific content varies.  Jarmusch starts off by instructing the spectator in the central theme of his film:  poetry emerging from everyday life.  In “Monday”, it’s Paterson studying a blue matchbox while he eats his cereal.  Later, when pen finally touches paper, we see how his observations of the matchbox become a wonderful little poem.  In later stanzas, he’s writing about different things, but they all derive from things he’s seen.

Paterson interacts with people throughout his day, eavesdropping on conversations between passengers, or holding brief talks with a coworker or his friends at the bar.  These interactions exhibit the stylistic properties of poetry:  they seem to repeat with slight variations.  Paterson’s co-worker always has something new to complain about in his home life.  Two acquaintances at the bar continue through an ugly break-up, yet never seem to change.

Paterson’s life feels like it is built from poetic structures, or as a character says in the film, like he “breathes poetry”.  Every day, he sees a pair of twins, suggesting ideas of symmetry, identity, and even repetition.  Every day, he meets another poet, suggesting ideas like allusion, intertextuality, and appreciation for the literary styles of others.  Every day, his girlfriend is painting something in their apartment in her black and white aesthetic, suggesting ideas like tone, mood, motif, and color.  Obviously, these same elements can be viewed as aesthetic components of film, but by dispensing with an explicit plot, Paterson relies more on these poetic techniques.

That being said, the film is not without plot.  There are narrative points that are crucial to the overall theme of the film and that pay off beautifully.  These range from Laura’s insistence that Paterson make copies of his poems to her recollection of a dream where they had twin children.  But, these beats mostly exist to provide a kind of forward momentum for the spectator to focus on while Jarmusch flexes his stylistic muscles on the fringes.  As a result of the repetition and relative mundanity of the sparse plot, Paterson has been criticized for being bland or boring.  This is a reasonable interpretation, but slightly misses the forest for the trees.  Jarmusch intentionally dresses-down the plot, both to draw attention towards the techniques he is using (while echoing those that poets use) and to emphasize that beauty lay hidden in the commonplace.  Nothing drastic need happen to Paterson to fuel his poetry.  It’s there in everything.

The culmination of all of these techniques literally places Paterson’s burgeoning poetry on the screen.  The generation is piecewise, and often shows some of the same repetition we’ve seen in other aspects of Paterson’s life.  The poems themselves were written by Ron Padgett (a real poet), some specifically for the film, and all have a palpable beauty to their wordplay and construction.  This is Jarmusch making his theme explicit in the unification of film and poem:  beauty can be birthed from the routine.  Paterson is watching the formation of poetry out of the primordial soup of the mundane trappings of a bus driver’s routine.  It’s a wonderful film, rich in style and subtext, and one that rewards careful consideration and repeat viewings.

3 thoughts on ““Paterson”: Jim Jarmusch’s Ode to Discovering Poetry in the Mundane”