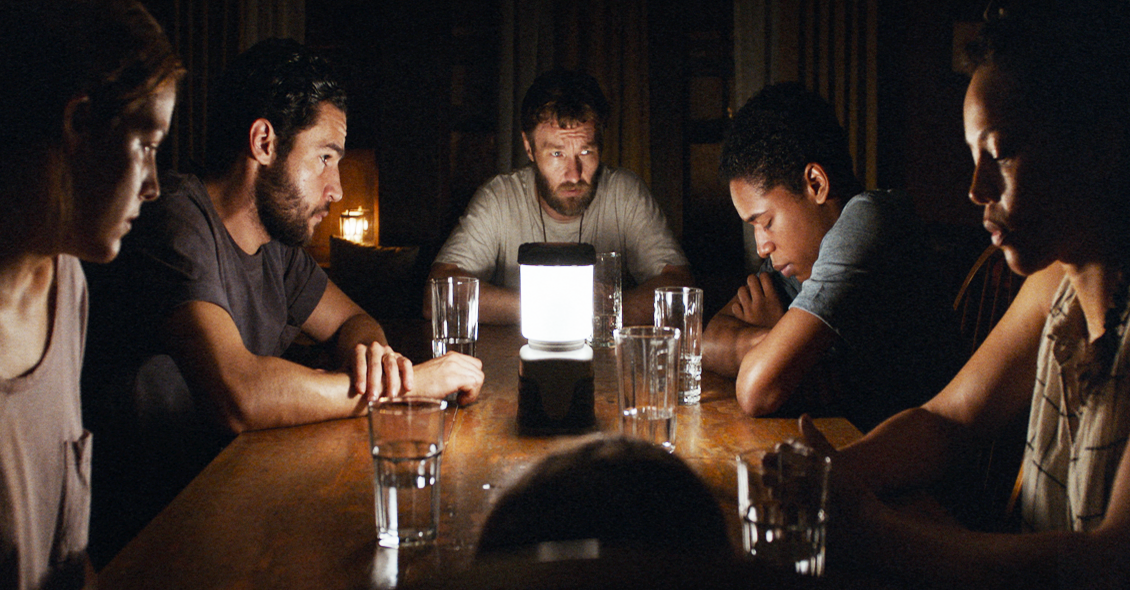 Consistency of tone is essential for a successful psychological horror story.  In It Comes at Night, writer-director Trey Edward Shultz establishes an unyielding bleakness that completely permeates the entirety of his post-apocalyptic story.  The constant pressure of this mood grows and oppresses the viewer, like an emotional constrictor squeezing all hope and joy from the proceedings.  In short:  It Comes at Night is not a fun or pleasant viewing experience, and it is clear from the opening shot that this is not a world where things turn out well.  Its dogged pursuit of desolation is not mere pessimism – it’s an exploration of human fear, mistrust, and desperation.

It Comes at Night trades in familiar post-apocalyptic tropes, crafting a destroyed world while eschewing any explanation for the downfall.  The film opens on an old man, wheezing and diseased.  His daughter Sarah (Carmen Ejogo) looks on in a gasmask.  His son-in-law Paul (Joel Edgerton) and son Travis (Kelvin Harrison Jr.) load him into a wheelbarrow, roll him out to the woods, kill him, and set his body ablaze in a shallow grave.  IT COMES AT NIGHT.

The plot continues along simple lines.  A man named Will (Christopher Abbott) tries to break in to the house, Paul captures him, and we learn that Will is simply looking for water from his family.  Potential trades and partnerships are suggested, and eventually Will brings his wife Kim (Riley Keough) and son Andrew (Griffin Robert Faulkner) to live with them.

The brilliance of It Comes at Night paradoxically lay in its refusal to show or explain anything to us.  Most of the horror elements are conveyed through Travis’s dreams, as he buckles under the trauma of seeing his grandpa succumb to the disease.  It is intimated that there is danger lurking out in the woods, and some strange things happen, but nothing ever really leaps out at you.  In the end, the audience is left only with ambiguity, and no explanation for how or why these terrible things have happened – both in the overall sense of the global pandemic, and in the more intimate context of these two families.

And perhaps it is because explanation is scant, It Comes at Night is unbelievably tense and scary.  There is a constant sense that the peace between these two families is fragile, and that things are about to spin out of control.  Again, the actual inciting event that throws us towards the sickening and depressing climax comes without real explanation, so the audience is free to imagine whatever they want.  Perhaps it helps to think of It Comes at Night as the epitome if “not showing the monster”.  Indeed, there may not even be a monster, but that doesn’t prevent the horror from unfolding all the same.

The themes of It Comes at Night are as bleak as they come, and remind of similarly dour post-apocalypses shown in films like The Road.  It is a constant struggle for survival, and the characters are hardened against trust and cooperation.  A film like this screams that humanity is doomed, as our instinct for self-preservation leads us to rebuke others, until we are left cold, diseased, alone, and beaten.  Hence,  our tendency towards brutality exposes the ultimate fragility of life and the inevitable fall into the abyss.  Though peaceful co-existence is a requisite for a functioning society, It Comes at Night theorizes that such conceits are facades, and that when the chips are down, it is the worst parts or humanity that define us.

There is no escape from such wonton pessimism in It Comes at Night, and these themes aren’t exactly attractive to general audiences.  As such, this is certainly not a film for everyone.  But, if atmospheric dread and musings on desperation are up your alley, then there are few better examples than It Comes at Night.