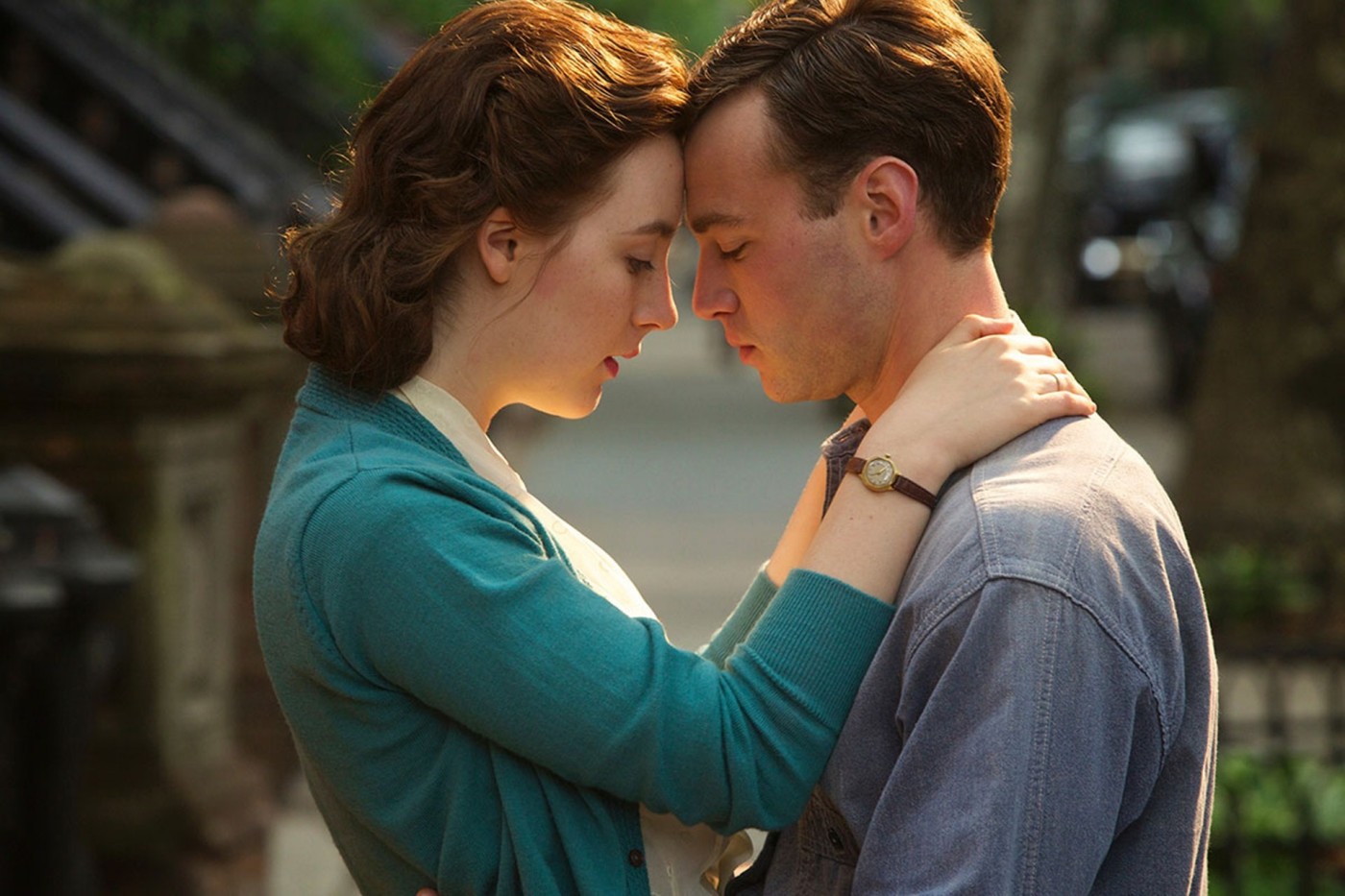 Opportunity is pregnant with possibility, but that does not dissolve the hardship associated with exploring it. John Crowley’s period piece Brooklyn explores this conflict through the eyes of Eilis (Saoirse Ronan; pronounced Seer-sha) as she leaves her small Irish town to start a new life in 1950s Brooklyn. There, she deals with homesickness, depression, and the struggle of starting anew. And though her path towards flourishing in the New World is beset with obstacles, along the way she discovers a joy which is all her own.

In Ireland, Eilis lives with her sister Rose (Fiona Glascott) and mother. Her life in Ireland is milquetoast as can be, and she struggles at her part-time job working for a local grocer. Since Eilis’ prospects in Ireland are bleak, her sister arranges for her passage to Brooklyn, a place to stay once she gets there, and a job. In a tearful goodbye, Eilis feels guilty for leaving and wanting a better life, but Rose insists that it is all for the better. The voyage over the Atlantic is tumultuous and humiliating, but Eilis survives it.

She initially struggles in Brooklyn. Her work at the department store suffers on account of her solemn affect, and she is often found crying to herself. The other girls at the boarding house are a bit icy and judging of her old-country behavior, but they eventually warm up to her. Eilis meets a nice Italian boy named Tony (Emory Cohen) and she begins to carve out a life for herself. Her performance at the department store improves with her mood, and she also studies to be a bookkeeper at night school. As an emergency whisks her back to Ireland, she promises Tony that she’ll return and continue their life together, an oath which proves challenging.

This film belongs to Saoirse Ronan. Her performance is populated with peccadilloes, blurring the line between Eilis and Saoirse. Like an actor three times her age, Ronan allows her face to do most of the acting – and it absolutely oozes character. Crowley appropriately pauses and ruminates on Ronan during multiple scenes, and each time she is able to convey a subtle emotion or thought with utter clarity. It is a career-defining performance, not due to its grandiosity or passion or profundity, but because of its palpable realness and subtlety.

Her co-lead Emory Cohen is no less impressive, but he is given less to do on account of this being Eilis’ story. He is an Italian-Brooklyn boy through-and-through. No son of his will grow up to be a Giants or Yankees fan; it is Dodgers or nothing. He and his brothers work with their hands – plumbers, electricians, construction workers. His infatuation with Eilis is omnipresent, and always feels genuine. The moments Eilis spends with his family are some of the funniest in the film, and the ultimate pay-off of their relationship is triumphant to the point of drawing tears.

For Brooklyn is the story of Eilis understanding that a small corner of this world belongs to her if she is willing to work for it. Whether that corner is in her home country of Ireland, or a small hill in the borough of Brookyln, it is uniquely hers. There are others in her life who will try to minimize her sovereignty, but they are only given power by Eilis’ sanction. In the climax of the film, when she finally comprehends and removes this sanction, we are treated to an increasingly uncommon cinematic statement: that Eilis exists for her own happiness.

Brooklyn will endure as a magnificent period piece with heart, character, and courage. The technique from the actors, director, and cinematographer are all immediately recognizable, and encourage multiple viewings. There is a chance that the film will be forgotten as just another Indie darling.  But if there is an inimitable draw for this film, it is Saoirse Ronan’s portrayal of Eilis, which should garner an academy award nomination. Should this nomination come to pass, Brooklyn will become a more household name. By virtue of its theme, characters, and the skill associated with its production, it certainly has earned such an accolade.

2 thoughts on “Saoirse Ronan Discovers Capacity for Joy in “Brooklyn””