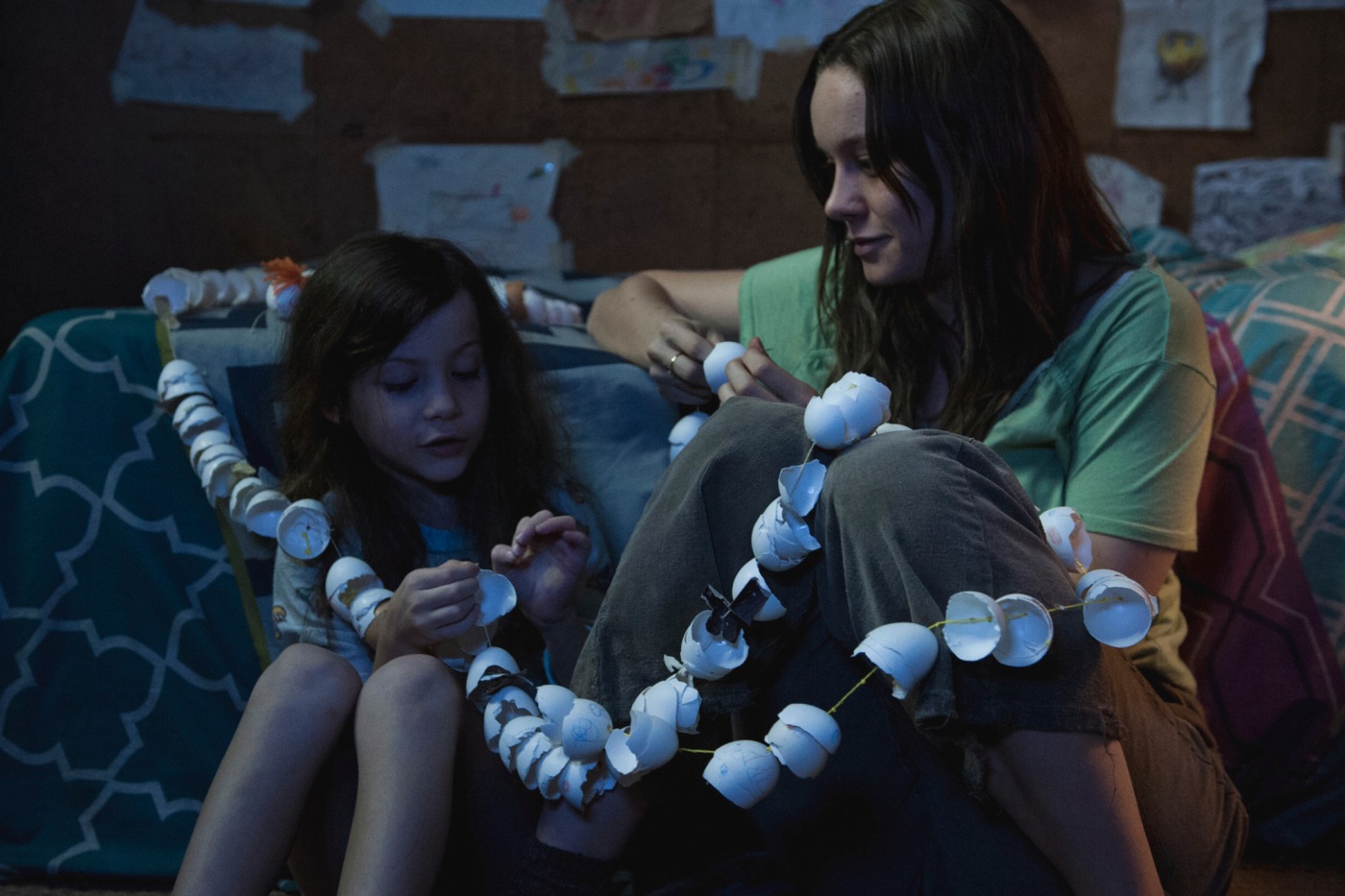 Lenny Abrahamson’s Room rewards a naïve viewer.  The film doles out exposition in a precise and practiced manner, and trusts in the intellect of the viewer to recognize important subtleties.  Suffice to say that if you are still in the dark and curious about the contents of Room, and you wish to experience the full weight of the masterful construction of its narrative, I must recommend you watch the film before continuing with this review.  For those of you who have seen the film, know its basic plot structure secondhand, or just plum don’t care about spoilers, I welcome you to continue on with my review of one of the five best films of 2015, and one of the most life-affirming films released in recent memory.

Room stars Brie Larson as Ma (real first name Joy) and Jacob Tremblay as her son Jack.  The film opens  with Jack describing “Room”, the world which they inhabit.  He has matter-of-fact names for everything in Room, from “Lamp” to “Wardrobe”, and we come to understand that he and Ma live in an 11′ x 11′ shed with rudimentary furnishings and only a single skylight as a window.  They have a TV, but Ma tells Jack that everything he sees on it lives in an entirely different universe, and that nothing exists outside of Room except for Old Nick, who comes by to bring them gifts.  In reality, he is Joy’s captor, having coaxed her into his truck when she was a teenager years ago.  Ever since, she has been trapped in Room, subject to frequent rapes at the hands of Old Nick, and has spun this entire yarn about Room to keep Jack ignorant of the world beyond their prison, a la Life is Beautiful.

The first act of Room takes place entirely within this small space, and the claustrophobia is oppressive.  Director Lenny Abrahamson actually shot these sequences in an enclosed 11′ x 11′ set, moving the camera and crew around and concealing  much of the equipment in various clever ways.  For example, the more complex takes were only made possible by Abrahamson filming  from the bathtub.  The director likened this style of film-making to playing Tetris, and as a result the confining nature of Room transfers perfectly to the screen.

Generally, during Old Nick’s visits Jack sleeps in the wardrobe.  The details of Old Nick’s nocturnal assaults on Joy are all viewed through the eyes of Jack, and the dramatic irony which results from the audience understanding more than he does is heartbreaking.  One night, he works up the courage to walk up to Old Nick while he is sleeping, and as Nick tries to touch him, Joy flips our and forbids Nick to touch Jack. Nick is furious, leaves, and turns off the power to Room in retaliation.  These events incite Joy to dream up a plan for Jack to escape – they will fake a sickness and try to get Old Nick to take Jack to the hospital, at which point he will pass a note to someone.  But first, Ma must convince Jack that there actually is an outside world!

The  first plan fails to even get off the ground, so Ma and Jack hatch an even more extreme version.  Enacting that plan represents the climax of the first act of the film, and is probably the most tense sequence in the entire movie.  It is remarkable how dangerous a single glance can be, and how the success of this escape balances on so many knife edges.  And then, despite clearing one hurdle, another presents itself almost immediately, building the tension further and further.

Upon resolution of this tension, the film enters into the second act.  Here, the conflict focuses on the rehabilitation of Joy and Jack’s introduction to the world.  This two-act structure is uncommon in the world of film, although certainly not unique.  Generally, it is reserved for stories with an abrupt about-face in narrative, which Room contains in spades.  Examples of films with similar narrative structures are Stanley Kubrick’s Full Metal Jacket and the aforementioned Life is Beautiful.  In contrast to the familiar three-act story, two act stories take advantage of the natural tendency of the mind to compare between the first act and the second, often with a clear demarcation.  In the case of Room, while the escape from their prison is clearly a boon, it portends far more subtle challenges to the characters, allowing us to frame the narrative of Room around this huge turning point of the escape.  Screenwriter Emma Donoghue (who also wrote the novel) is to be commended for using this structure and for staying faithful to it with the adaptation, when she could have tried to fit the narrative into the more traditional three-act structure; much of the strength of Room is derived from this foundation.

Brie Larson and Jacob Tremblay lend weight to all of these conflicts, and each inhabit their characters completely.  Of course, we all know now that Larson took home an Oscar for her performance, among many other awards.  She oozes pain as she deals with her captivity and laments the trauma of her time in Room, but love for Jake also bleeds through every motion of hers.  And, despite his young age, Tremblay equals Larson’s efforts.  The most emotional moments in the film are driven by his emerging understanding of the situations confronting him and Ma, and the film is bookended by his voice-overs.  He is able to portray every emotion asked of him, from wonder and exhilaration, to anger and terror.  The convergence of these two actors in these roles will be discussed as one of the most successful pairings for years to come.

For Room espouses the idea that a trauma need not be the defining moment of one’s life, whether that life is spent in the 121 square feet of Room or the infinity of the world at large.  Skirting the challenges that face each of us in the name of safety and normalcy may bring momentary comfort, but these are not long-term solutions.  Instead, they lead to the stagnation of the soul, and prevent any amount of flourishing and happiness.  One day, Joy decided not to protect Jack from the expansive world being kept from him, but to charge him with fighting for and acquiring access to that world.  Not to be outdone, Jack returns the favor later on.  Thus, through its two stirring characters, Room dramatizes the idea that the consolation of the familiar and the safe stunts the development of the human spirit, and does so through a dramatic story of imprisonment, escape, and rehabilitation.