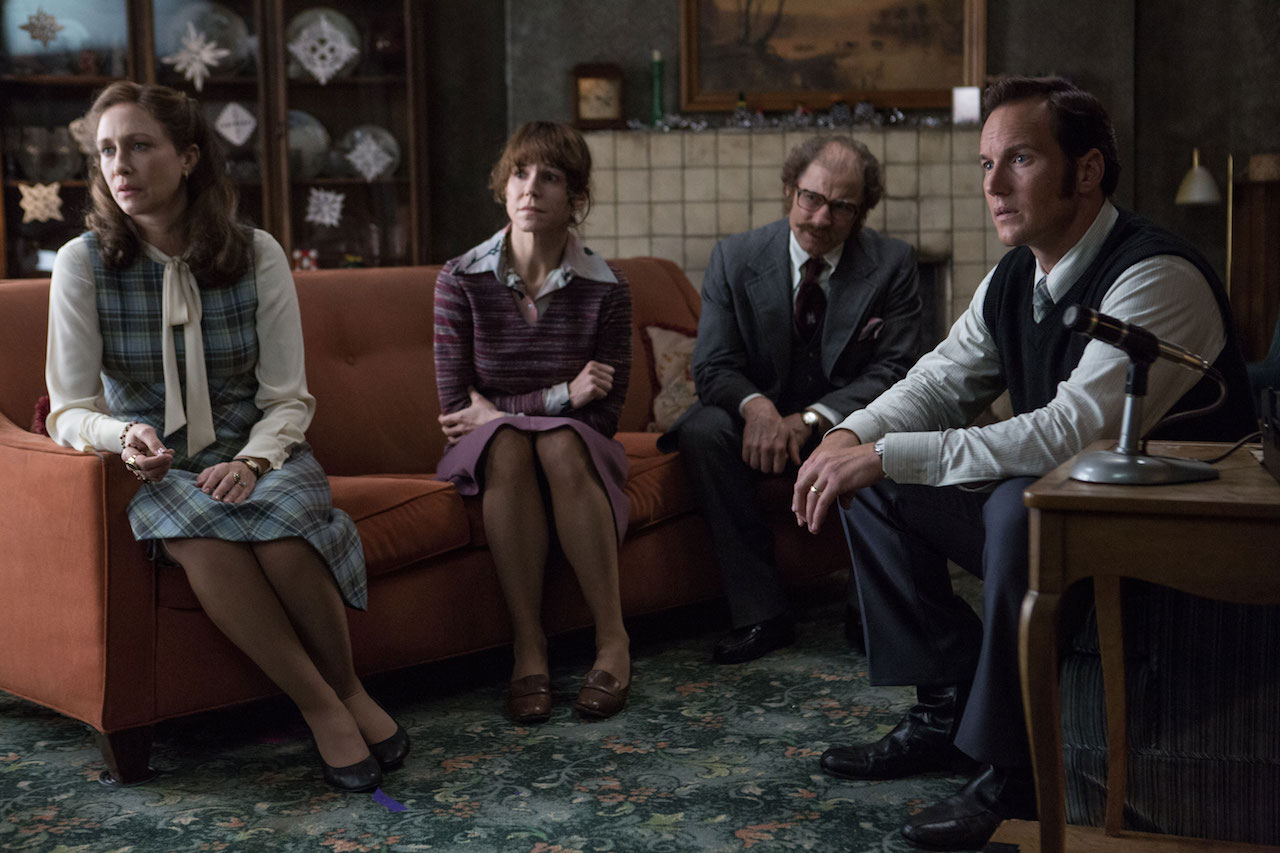 The Conjuring was one of the most impressive horror films to emerge from Hollywood in the last decade, so James Wan’s follow-up to the 2013 hit has been widely anticipated.  In a turn that restores a modicum of faith in mankind, the sequel is an overwhelming success.  Ed and Lorraine Warren return with another paranormal investigation, this one based on their most-documented case:  The Enfield poltergeist. As before, the pair and their relationship form the kernel of a masterful supernatural high-horror film.  The Conjuring 2 will delight and terrify genre fans and whichever casual movie-goers have the courage to buy a ticket and peer through their fingers.

The basic backstory of the paranormal case that provides the foundation for the plot of The Conjuring 2 involves an incident which befell an English family in the 1970s.  The Hodgsons are a family of five:  single mother Peggy (Frances O’Connor), sons Billy and Johnny, and daughters Janet (Madison Wolfe) and Margaret.  In practice, only Janet and her older sister Margaret have any involvement with the story, and the young boys mostly exist to wander through the dark and get scared by sounds.  Janet is the focal point of the haunting, as both the target of the poltergeist early on and a subsequent possession.

As things go bump in the night in Enfield, the film continues the development of the relationship between Ed (Patrick Wilson) and Lorraine (Vera Farmiga).  Fresh off the Amityville incident, Lorraine is concerned that they are exposing themselves to evil forces too often, and requests that they abstain from future paranormal cases – at least for the time being.   This relationship is the emotional core of the film, and these characters are also central to plot points and in ways behave as our proxies for the story.  Dealing with their home lives and their insecurities is what lends the story most of its weight, and without them the film would probably devolve into a run-of-the-mill jump-scare fest.  Especially poignant is the moment the two receive their call to action, and Lorraine realizes that though she fears for their lives, these evils are interconnected, and by neglecting to help the Hodgsons in England, they encourage evil to descend upon their own home.

In that sense, the film sports well-developed thematic elements as well.  The primary theme of The Conjuring 2 is one of having the courage to love and support family and friends through even the direst circumstances, but there are themes involving ridicule, hoaxes, and trickery as well.  These ideas lend the film a little extra tension, and provide some especially rewarding sequences in the latter half of the story.  But, as absurd as it sounds, this is a love story.  Ed and Lorraine are two people who just get each other.  Patrick Wilson and Vera Farmiga again lay claim to superb performances, and are absolutely the heart of this franchise.  And, whether they are exorcizing a demon, consoling a frightened child, or playing the guitar they always lean on each other for support.  There are some astoundingly tender moments in this film, which not only instill it with some genuine heart, but also make the descent into terror all the more effective.

And that descent is handled beautifully.  James Wan again displays his deft ability to manipulate the camera to generate scares.  There are some long takes that really ratchet up the spooky mood, but even something as simple as leaving the camera stationary with a low profile pay dividends when we see a piece of furniture or something slide towards us.  Though he sometimes risks using a hand-held “shaky cam” style a little too much, the action is generally easy to decipher though I would understand if this element annoys some.  Other stylistic elements like lighting, pacing, and tone are all pitch-perfect, and truly demonstrate Wan’s mastery of the genre.  There are also wonderful touches that indicate his love of other films, including another homage to The Poltergeist.

Previous praise notwithstanding, there are some issues with the film, almost all involving plot choices.  To close the second act there’s a weird pseudo-abandonment of the investigation of the haunting for a pretty specious reason.  Then, the resolution of this conflict is at best slapdash and at worse confusing.  From an overall character standpoint, there are probably too many side-characters that don’t do much besides distract from the story, and pruning away some of them would have allowed more time to focus on Ed, Lorraine, and the Hodgsons.  There are some instances where Wan lets a character go a little over-the-top and on-the-nose to the point of unintentional comedy.  Many have praised Wan’s creature design in the past, and though an ancillary figure is wonderfully creepy, I feel like the major baddy in this film was phoned in a bit.

All-in-all, The Conjuring 2 is a fantastic follow-up to the original.  The sequel cements that the core of this franchise is in the characters of Ed and Lorraine Warren, and that the formula of having them come in and identify a new paranormal threat plays out incredibly well.  James Wan has shown again that if a reasonable amount of respect is paid to the genre, then horror can terrify and delight even the most cynical audience.  Fortunately, off the back of this resounding success, the formula will likely continue with more stories from Ed and Lorraine’s case files, which portends more paranormal proceedings in the future.

The sequel curse has been averted!  What are some of your most favorite horror sequels?  Did you enjoy The Conjuring 2, and do you look forward to more entries into this franchise, or do you worry that they will eventually botch it all up?  Let us know in the comments section, and wrangle in some of your horror-loving friends by sharing this post on all of your media do-hickies.

One thought on “Building a High-Horror Franchise through Characters: “The Conjuring 2””