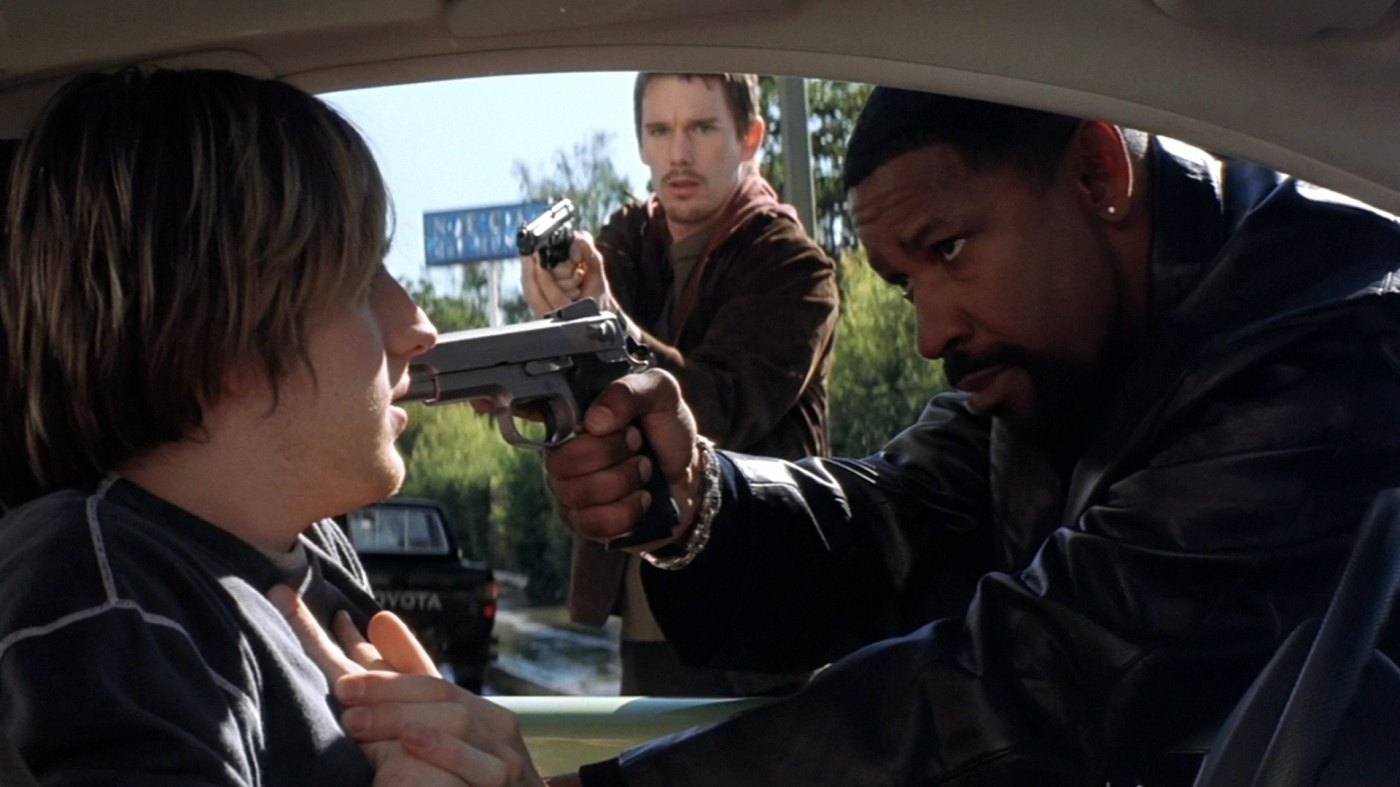 To protect the sheep you gotta catch the wolf, and it takes a wolf to catch a wolf.

No fun when the rabbit has the gun, is it?

Antoine Fuqua’s Training Day is a spectacular and dingy tale of morality overflowing with great acting, wonderful pacing, and themes that are simultaneously prescient and timeless.  The film resonates louder and louder with each instance of police violence across the nation, as those in power bend their institutions to subdue those in their communities.  At the same time, the film deals with ambition, the length that “heroes” will or should go to do “good” things, and the standard “the ends justify the means” discussion, but in a more urban and realistic setting.  When the events of the film come to a climax and Officer Hoyt draws a firm line, his new worldview clashes directly with Alonzo’s, and there is simply no room for quarter.

Training Day features a plot that appears fairly straightforward on the surface, but actually has subtleties bubbling up from start to finish.  Jake Hoyt (Ethan Hawke) is the newbie detective on a narco beat, and Alonzo Harris (Denzel Washington) is the streetwise mentor who can open all the doors for Hoyt.  The two are narcotics officers, and go through a day on the streets of LA doing their investigations.  Along the way, a more nuanced collection of hidden plot elements emerge in a hyper-realistic kind of film noir,  with the audience uncovering more and more details at the same pace as Jake.  There is also a fantastic false climax in the film, which serves to trick the audience into thinking that the story is near its end, but careful consideration of the sequence of events allows you to see precisely what is going to happen.

The character of Alonzo Harris is a fascinating and seductive test case on just how far we should be willing to allow a so-called “dirty” cop to go.  He has street-smarts aplenty, a great intelligence, and connections from the street level up to federal judges.  By casting him as the mentor and confidant to Jake, he is meant to be revered throughout the film.  He is a master manipulator, and through his career has managed to inch the line of what he is willing to do forward so many times that now he is as evil as those he pursues.  But it is only by small steps that we recognize him as the villain.  Even up until the very moment we understand the depths of his betrayal, some in the audience may still feel as though his way is the right way.  Denzel Washington is able to imbue Alonzo with a sense of pragmatism, arrogance, and wild unpredictability; indeed, he is nearly a force of nature.  Still, hints are dropped throughout the film that his methods are ultimately to be proven wrong, as Jake is able to succeed through his own methods.

By stark contrast, Jake Hoyt is primarily good, but he allows his blind ambition to compromise his values at every turn.  This is his primary contradiction  – he implicitly accepts that his ideals can be abandoned if it guarantees his advancement.  Because then, he can apply his ideals responsibly.  He fails to realize that once relegated to mere bargaining chips, ideals aren’t worth much at all.  Like Jake, we all want to make our dreams come true, but sometimes we realize all too late that the price has climbed too high, until we wonder if the cost can be justified at all.  In Jake’s case, it literally takes him staring down the barrel of a gun before he realizes that serving this ambition could cost him his life – if not immediately, then eventually.  From this galvanizing moment, we see a more-determined and explicitly moral Jake.  He has learned his place in the world and the consequences of trading away integrity for advantage.  He is going to take down Alonzo; no more half measures.

The climax of the film directly pits these two wonderful, full-fledged character arcs against each other.  Alonzo is the haughty mastermind who begins to understand the significance of his own failings, and must scramble to avoid scattering all his ill-gotten gain.  Hoyt is the exact opposite:  a young up-and-comer who is challenged to abandon his own ideals in favor of a more pragmatic worldview.  When he recognizes the folly of this path, he is instantly beset against Alonzo (the attempted murder certainly didn’t help).  In a particularly genius turn, we recognize at the conclusion of the story that these two men have always been polar opposites, but Alonzo was able to convince Jake that his path was the righteous one.  Hence, the narrative structure of the film perfectly dictates the conflict and suggests the thematic nature as well.

Just as the narrative appears to be a simple mentor/trainee relationship, the themes apparently deal with the abuse of police power.  As we discover the intricacy in Alonzo’s scheme to pay off the bounty on his head, we similarly begin to understand the thematic nature of his conflict with Jake.  Indeed, Jake was always beset against Alonzo, and they are always bashing heads against each other in strict narrative terms.  But they are fundamentally different characters with contrary defining characteristics:  Alonzo is the practiced pragmatist, and Jake the idealist.  The genius of Training Day is in how it unifies all of these aspects in a single climactic sequence.  Plot tensions settle, the characters clash and resolve, and the accompanying themes are compared – with Jake’s principled idealism declared victorious.

Training Day is often considered a standard dirty-cop movie, but this is superficial analysis.  Fuqua, with considerable help from Ethan Hawke and Denzel Washington, has crafted a modern-day morality tale that successfully unifies plot, character, and theme towards a single grand vision:  a denunciation of pragmatism, especially in regards to the abuse of legal power.  As practically every week offers a new horrifying example of the dangers of Alonzo’s approach to law enforcement, Training Day becomes more and more prophetic – and for championing Jake’s morality of principled action, more and more vital.