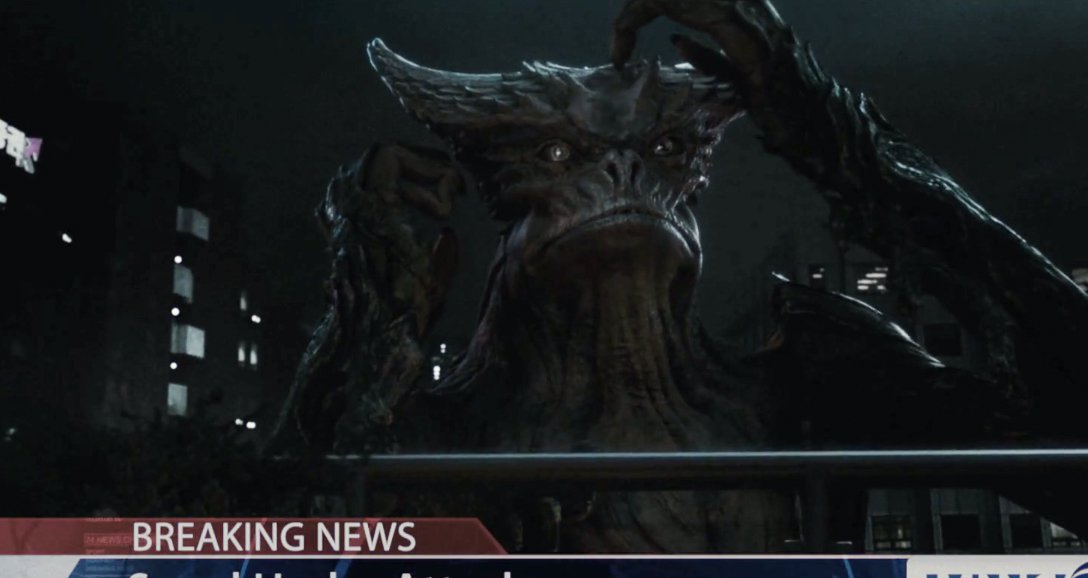 Writer-director Nacho Vigalondo is no stranger to off-the-wall storytelling; Los cronocrímenes (Timecrimes) may be the best film featuring time-travel ever.  In Colossal, Vigalonda tries his hand at a kaiju movie, but infuses it with his own style.  Vigalondo exploits the genre for allegory and dark comedy, crafting an inventive exploration of indulgence, regret, and self-destruction – followed by attempts at self-improvement.  The director has a deft command of his characters, abrupt shifts in mood and tone, and thematic allegory.  The peculiarity of Colossal is a big part of its appeal, but it has far more to offer than its bizarre gimmick.

Above all, Colossal is a character-driven story.  The focus is on Gloria (Anne Hathaway, who is fantastic) and Oscar (Jason Sudeikis), two childhood friends reunited after Gloria returns to her nondescript Midwest town to collect herself.  For the first 20 minutes or so, it is most certainly that kind of story:  Gloria is an unemployed writer, drinks all night, and is a huge mess.  The opening scene of the film is her boyfriend Tim (Dan Stevens) breaking up with her and kicking her out of the apartment.  Once she makes it back home, Oscar helps her out with some furniture, offers her a job at the bar he owns, and generally nice-guys his way back into her life.  The conflict of working in a bar while trying to curb her alcoholism is obvious.

Then, one day, a titanic reptilian monster attacks Seoul.

Yes, this is the same movie.  The connection is simultaneously simple and absurd:  at 8:05 am, if Gloria enters a local park, the kaiju appears in Seoul as a kind of avatar that she controls.  This single conceit is explored for the remainder of the film, reflecting Gloria’s thoughts, feelings, and goals as she comes to terms with this supernatural coincidence.  There are twists along the way, but I’ll leave those to be discovered.

To help convey what is happening between Gloria and the kaiju, Vigalondo takes advantage of some interesting cinematic techniques.  The cinematography in Colossal helps connect Gloria and her avatar, especially in the framing and shot composition.  There are some obvious instances where Gloria’s movements overlay a television showing the kaiju’s movements, but more subtle variations of this technique exist as well, and they cement the connection in the viewer’s mind.  Intelligent continuity edits also contribute to this relationship, and help to keep some of the more action-heavy scenes intelligible and fun.  Even the CGI used to create the kaiju looks fine (especially on a budget of $15 million).  All-told, Colossal sports a solid command of visual storytelling, so it never feels over-explained or spoon-fed to the audience.

This is also true with the allegorical aspects of this concept.  Initially, Gloria is predictably terrified of her “powers”, and feels quite guilty of the damage she unwittingly caused before understanding what was going on.  Later, as she struggles to curb her drinking, she wantonly displays her kaiju powers to Oscar and some friends while drunk, and she hurts many more people.  The regret is palpable, and the largeness of the kaiju-sized mistake serves as direct allegory.  When she was just drinking herself into a stupor, she was mostly only hurting herself.  Now, her drunken mistakes cost innocent lives.  It’s a spooky and poignant portrayal of how getting drunk (or really any substance abuse) can be fun – at least until it isn’t.

Impressively, Colossal captures the same sentiment through shifts in mood and tone, again displaying the abrupt transition from fun-loving partying to self-damaging drunkenness.   Drunks in real life can certainly be affable and easy-going to a point, but we’ve all experienced a person pivoting from “fun-drunk” to “mean drunk”, becoming bitter and savage at the drop of a hat.  The strength of Colossal is that is can show this turn in both the overall narrative, and in the way the mood and tone of the film shifts radically.  Some may interpret this as inconsistency, as the film is sometimes a comedy and sometimes a dark and violent portrayal of abuse.  But, this is intentional:  the audience is meant to be jarred by the shift, and then hopefully recognize that it fits thematically.

In fact, one of the greatest strengths of Colossal is this two-pronged approach to the theme of indulgence, self-destruction, and the struggle with self-improvement.  The theme is expressed both in the narrative (the subject) and the tone shifts (the style).  The moment when Gloria learns that her actions have devastating consequences and she stops her careless drinking and kaiju-ing has echoes of “hitting rock bottom”, and serve as a starting point for her self-improvement.  Then, as the tonal shift kicks in (initiated by a plot point I’m keeping secret), we see the same struggle for self-improvement now beset against by contradictory forces in her life.  The magnificent command of narrative, tone, and theme is so complete that it continues through the final shot of the film, where we’re reminded that with all that Gloria has gone through, she still has some issues to work on.

In the end, Colossal is to be commended for its refusal to tell an epigonic kind of monster story.  It has an inventive plot, complicated characters, and an amazing command of allegory, mood, and tone.  Everything in the film contributes to its universal theme:  that relatable and titanic struggle to be better versions of ourselves.  Much like The Lobster or Swiss Army Man, Colossal will not hit the mark for everyone.  But those who are ensnared in its talons will find themselves a quirky little gem.

Any Colossal fans out there?  It just went to a wide release this week, and as you can tell, I fully endorse this one.  I was a little worried going in that it would be too heavy-handed and blunt, but that is not the case.  It even has some interesting surprises from a story standpoint.  Definitely give it a shot!  And, as always, do me a favor and share, like, tweet, post, and all that good stuff if you liked this or other pieces here on Plot and Theme.  Sure, I’d keep writing this stuff to an empty room, but it’s more fun when people yell at me for being wrong!

One thought on ““Colossal”: Part Kaiju Flick, Part Exploration of Abuse and Recovery”