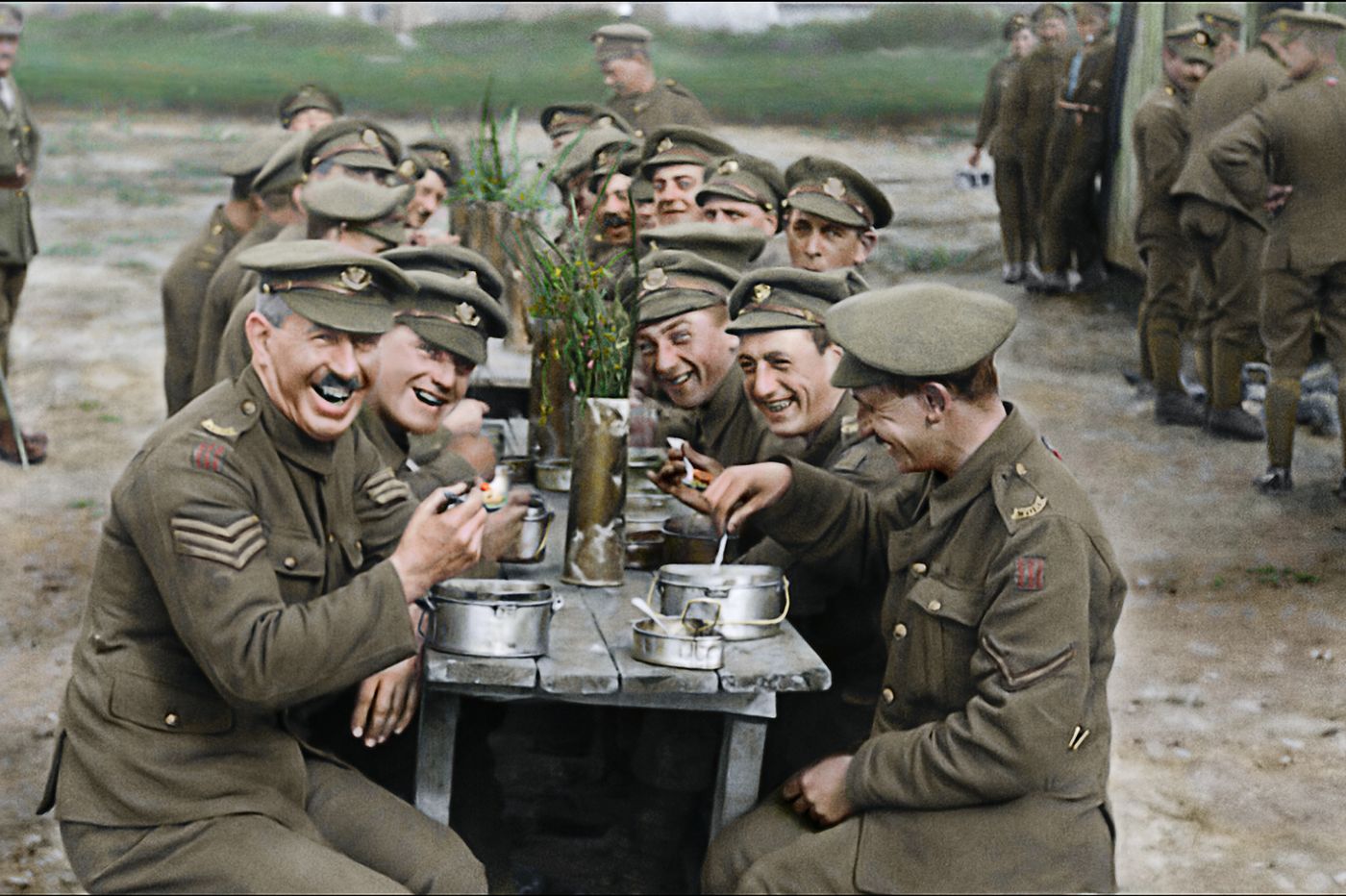 They Shall Not Grow Old is a day-in-the-life of the British soldier during World War I. The documentary from Peter Jackson was commissioned by the Imperial War Museums and 14-18 NOW in association with the BBC to celebrate the centennial of Armistice Day. When these groups approached Jackson, they had only one caveat: Jackson must use their archived WWI footage exclusively. After a think, Jackson decided to restore this old footage using modern production techniques, all towards a singular effort: show us the life of a WWI British soldier.

The “story” in They Shall Not Grow Old, if it can even be called that, lacks any real narrative direction or plot. There are no references to specific people, places, battles, or even many dates. Jackson is not interested in telling a granular story, he is interested in the universal WWI trench warfare experience, the things that all British soldiers on the Western front shared. To accomplish this, Jackson leans heavily on archival footage and audio interview, weaving together stories from multiple men over the course of the war to paint a singular picture of The Great War.

This was no small task. Jackson and his team combed through 100 hours of footage and 600 hours of audio, eventually paring that down to select sequences and interviews from about 120 servicemen. 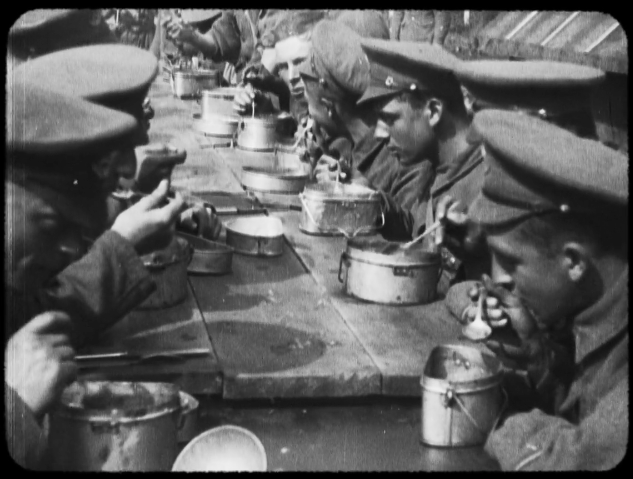 The basic outline of the “story” begins with men recounting their feelings when War was declared on Germany, and then continues in a linear fashion. The atmosphere was certainly jingoistic, with young men feeling significant pressure to enlist, lest they seem unpatriotic and cowardly. Other men seemed not to notice this, indicating that their passion for King and Country was genuine and invigorating. From there, the men enter basic training, travel to the front by boat and then marching, and then we are treated to life at the Western front and in the trenches. Everything is sad and scary here, and we see plenty of shelling, tranch raids, death, and eventually even a stylized offensive.

The film starts off by acclimating the audience to its particular style. It will be unidentified soldiers telling their story in snippets of audio, probably averaging about 10 seconds each. That audio plays over the restored archival footage, and at the beginning that footage is small and uninspiring.

But that’s why Jackson felt restoring it with modern techniques was so important. 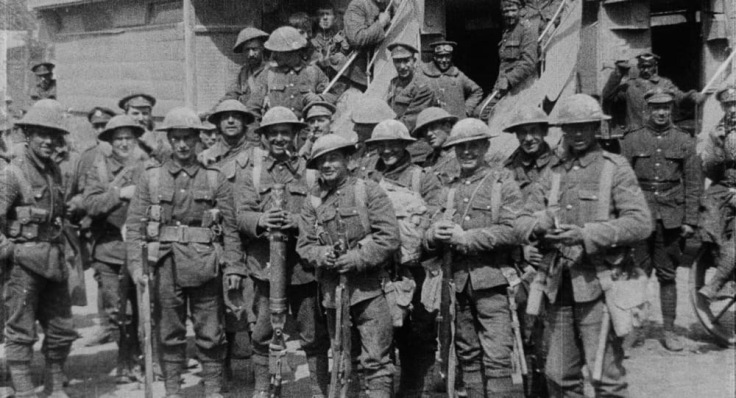 There are two moments of brilliance that convey just how powerful Jackson’s stylistic choice of restoration could be. The first is the opening shot of the film. It is small, black-and-white, and has a square aspect ratio, taking up only about 10% of the screen. As the first few men tell their general thoughts about the war, we zoom in and the image gets larger, crisper, and realer. By the time the title card is on screen, we’re already in the world.

But not fully. Because there is still a second transformation in store. Before the soldiers get to the front, the audience is inundated with that particular style that was mentioned previously: voice audio over silent black-and-white footage. Once they get to the front, Jackson keeps the voices and the footage, but augments them – almost miraculously. Within a second, the screen colorizes, vocal actors lend words to the silent footage, and sound effects of whizzing shells and explosions fill the air. The transition is almost magical; it’s like stepping back into 1916.

Restoring this footage was a remarkable technical achievements. Jackson and his team were met with many challenges, all of which you’d expect from 100-year old film. Some of the film was damaged with scratches or warping, which was removed or at least sufficiently cleaned up. The cameras used in WWI were hand-cranked, so footage would be at different speeds, which had to be corrected. Even one frame per second off and the movements looked unnatural, so this had to be perfect. Obviously the footage had to be colorized, and it is pretty good, but also obviously difficult. Jackson argues in a behind-the-scenes featurette that these men lived the war in color, and that it was only the technological restrictions that kept the cameramen from filming in color, so it was prudent to restore this color to the best of their abilities. Likewise, the war had sound. Jackson went to great lengths to employ professional lip readers to ensure that the content was accurate and took advantage of voice actors who were from the same places in England as the men on the screen so that the voices sounded genuine. These seem like small stylistic choices, and including each one of them introduced unique challenges to the film making, but the overall effect is magnificent, and well worth the effort. 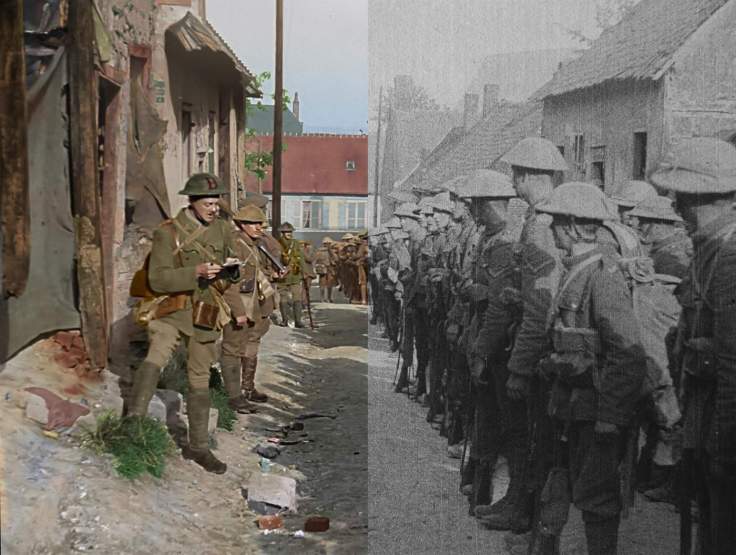 Because of all of this hard work, you are in the trenches, and there aren’t many punches pulled. Conditions in the trenches are often revolting. There’s standing water, mud so thick that it would drown people like quicksand, and cold snaps that could amputate your foot. There’s fleas, lice, and plenty of rats. The men are shelled constantly, and sometimes German snipers end up have a good bead on you if you’re sitting in just the wrong spot. Death everywhere, as is the smell. The front is a sad, scary, and brutal place.

But also because of all this hard work, you are among these men and you almost get to know them. They aren’t in scratchy black-and-white moving three frames too fast looking like they stepped out of a Buster Keaton film or Newsreel footage. They are in color, living, breathing, joking. These men don’t feel like numbers in a ledger or participants in some historical text, they feel like ordinary people. You can see relief and joy on their faces, but also great fear and doubt. One gentleman walks back from the front with a noticeable tic, a sure sign of Shell Shock. 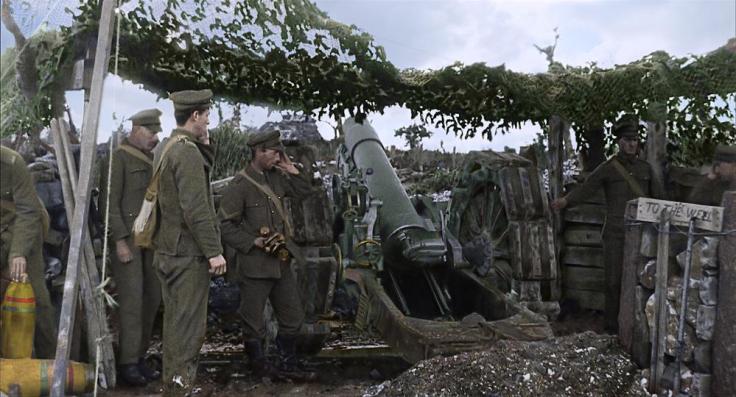 Then the orders come in to launch an offensive. Here’s Jackson did not have any footage because brandishing a camera during an actual trench warfare offensive charge is downright suicidal. Not that having guns helped very often. To hear the men tell their stories of offensives, practically every last man expressed astonishment that he survived. Instead of footage, to show this part of the story and convey the absolute horror and carnage, Jackson uses a contemporary magazine called The War Illustrated. These propaganda pieces were the only way that some people at home experienced the war, rousing drawing of a charge, a victory, or a triumph over the hated Germans. Jackson liked the visuals, but dislikes the inherent propaganda, so he shied away from the most outrageous and obvious offenders. Additionally, the illustrations are cut with some of the faces we’ve seen previously – and then images of a corpse sporting significant resemblance. So much for the propaganda.

They Shall Not Grow Old is a grand achievement from Peter Jackson and his team. They set out to show us that The Great War was fought by normal people and give us a glimpse into what their lives were like. By restoring and modernizing the footage and using the soldiers’ own words to describe their daily lives, Jackson invites the audience into the trenches of the Western front. Though it was 100 years ago, real men fought in this war, real men suffered, and real men died. It was not a pretty place, but it is a poignant one.