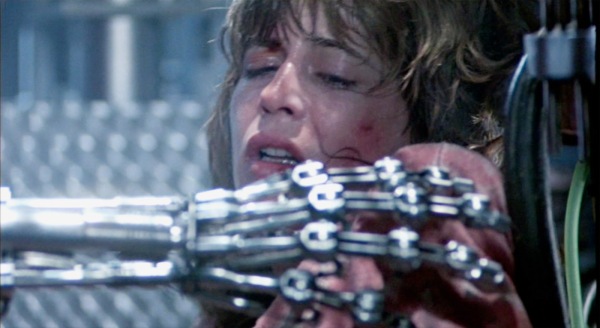 The Terminator (1984) is a better film than Terminator 2: Judgment Day (1991).  The three other movies in the franchise are utter garbage and will not be discussed further.  And, if you’ll lower your pitchforks for long enough, this piece will provide several arguments asserting the superiority of The Terminator.  I’ll compare three aspects of the films and explain how The Terminator bests Terminator 2 in each:  1.) The overall plot-theme of the story, 2.) The structure, pacing, and the effectiveness of the storytelling, and 3.) The characters and their respective arcs.  I will show that the first film showcases a stronger and more original plot, streamlined structure, and more interesting characters.  After remarking on the sequel’s deserved accolades, the stark verdict will follow:  Terminator 2 is exemplary, but The Terminator is the greater film.

END_OF_DOCUMENT_TOKEN_TO_BE_REPLACED

The Discovery has all the markings of a potent science fiction parable, but none of the follow-through.  The central conceit, that a scientist has discovered irrefutable evidence that an afterlife exists, is simple yet wrought with fascinating consequences.  But, as the film attempts to explore its ideas, it is bogged down by poor characters, confusing and unnecessary plot devices, and a banal ending that treads familiar paths, lacks visual storytelling fundamentals, and still confuses.  As it stands, The Discovery feels less like a feature film, and more like an episode of Black Mirror – and a weak one at that.

END_OF_DOCUMENT_TOKEN_TO_BE_REPLACED

Kong:  Skull Island is an unbalanced amalgamation of B-Movie schlock and hyper-budget  blockbuster special effects (est. $185M).  It teems with A-List stars searching vainly for a place to die so they don’t have to embarrass themselves any longer.  The plot makes some sense, but the specific beats that move it from scene to scene are fairly nonsensical.  And like clockwork, we can’t go five minutes without someone getting eaten, something exploding  / catching on fire, or the titular great ape fighting something.  The film especially founders tonally, where it can’t quite decide how serious it should be.  Even the gigantic action set pieces are bizarre and uneven – sometimes incredibly realistic and other times practically cartoons.  At its best, Kong:  Skull Island is an expensive farce; the most fun you can have is wondering aloud what possessed so many people to light so much money on fire in such a strange way.  At its worst, it is a hum-drum reiteration of better movies without anything particular noteworthy about it at all.

END_OF_DOCUMENT_TOKEN_TO_BE_REPLACED

Logan, James Mangold’s conclusion to the Wolverine franchise, dispenses with a safe approach to the comic book genre in favor of careful characterization, genuine emotion, and tactful storytelling.  It is an unabashed hard-R action movie bursting with violence, gore, and harsh language.  But, Mangold and company employ the R-rating towards more than blood and F-bombs (though there’s plenty of each).  By withdrawing the film from the purview of children spectators, Logan is able to tell a more patient and delicate story without compromise.  Instead of a frenetic pace that plays down to the attention span of teenagers and rabid fanpersons, the culmination of the Wolverine trilogy adopts a more practiced approach to super-hero storytelling that rewards on every level and will encourage repeat viewings.

END_OF_DOCUMENT_TOKEN_TO_BE_REPLACED

A pair of off-the-radar film released trailers recently, and both of them appear to offer something interesting for the fan of genre film.  Each also, in their own way, use concepts revolving around the afterlife as major plot elements.  These films are The Discovery and The Void.  This will be a short piece introducing each of these films and their trailers, and offering a few stray observations about what we’re seeing (and what other people have been saying).  Here we go!
END_OF_DOCUMENT_TOKEN_TO_BE_REPLACED

It is a tricky thing to tell a good story when practically every audience member knows the ending.  It is trickier still when you pack your story with abject fan service, telegraphed plot choices lacking any inspiration, and under-developed characters delivering wooden dialogue.  Rogue One:  A Star Wars Story is guilty of all these failings and many more.  It is not a complete disaster, though it coasts off the strength of an exciting third act and a near-fatal dose of nostalgia.  As a result, though the initial hoopla will be to declare Rogue One:  A Star Wars Story as an utter triumph, extra consideration of the film (perhaps with your gender-neuter fanperson beer goggles off) will reveal its many disappointments.