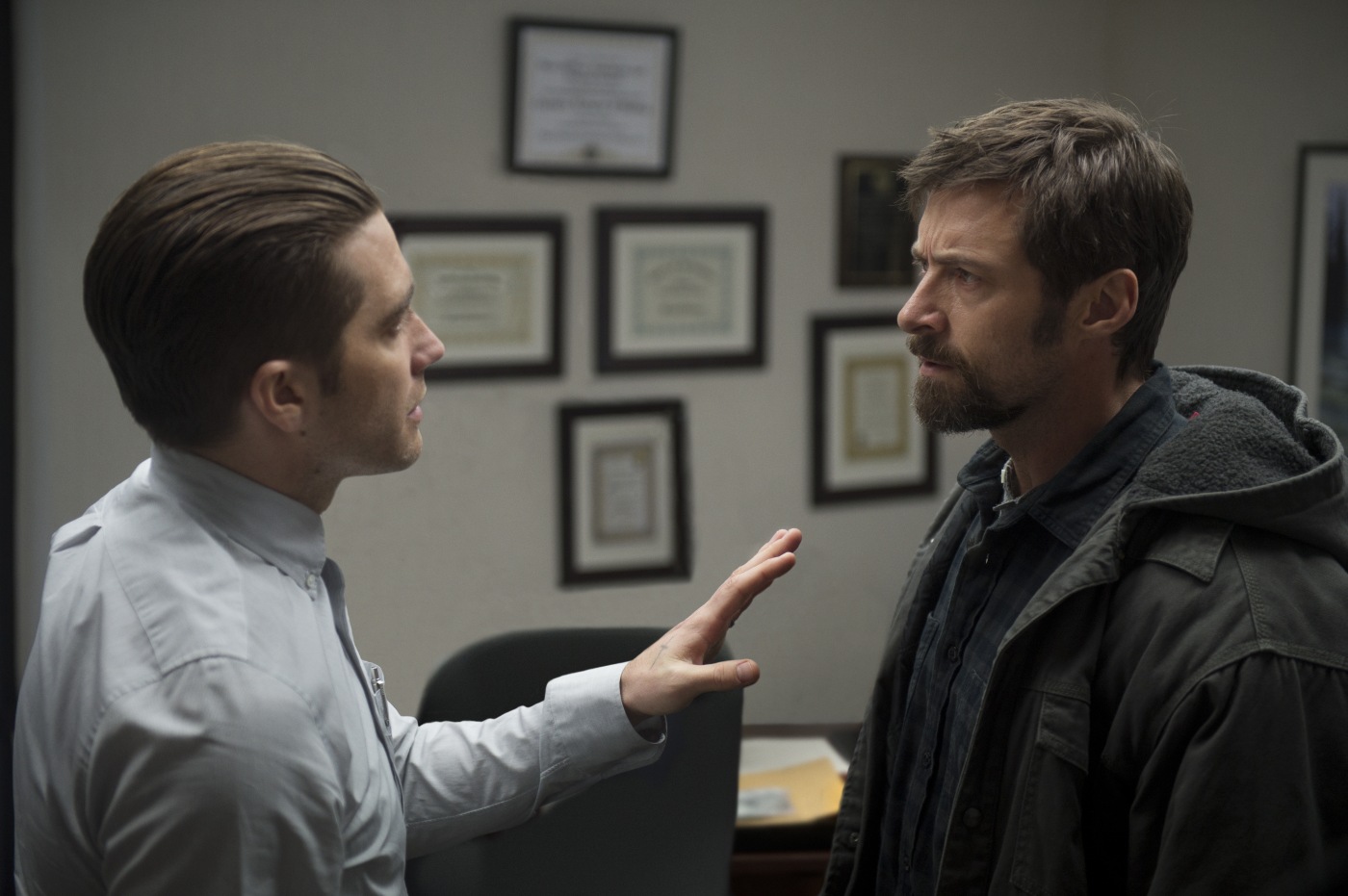 Denis Villeneuve week nears its end with his only true American film, and the largest budget he’s had to work with to date: the kidnapping mystery/thriller Prisoners. Of all of Villeneuve’s films, this may be the most uneasy, the most challenging to watch, and the one film that is truly unafraid of exploring the depths that humanity can reach at the intersection of desperation and good intention. Its subject matter is particularly challenging for parents, as it primarily deals with the disappearance of a pair of young girls.

For all its bleakness, Prisoners is a star-studded affair. Hugh Jackman and Maria Bello play Keller and Grace Dover, and Terrence Howard and Viola Davis play their friends Franklin and Nancy Birch. The Keller and Birch families celebrate Thanksgiving together, and their sons and young daughters spend some of the food preparation time wandering through the neighborhood. They come upon an parked white campervan and hear music coming from inside. The children return for dinner, but the two young girls Eliza Birch and Anna Dover leave the house before desert. They cannot be found outside, and the white campervan has disappeared.

This introduces us to Detective Loki (Jake Gyllenhaal), who is assigned to the case. The investigation has many aspects, but eventually the driver of the white campervan is found – one Alex Jones (Paul Dano). Unfortunately, when Alex is brought in for questioning, it becomes clear that he is mentally challenged. With the mental faculties of a 10-year-old, he cannot understand the questions being asked of him. Hence, Loki must release him after 24 hours, despite protests from Keller. Upon his release, Keller attacks Alex and pleads for information on his missing daughter. The response, which only Keller can hear in the tumult, “They were smiling when I left them” stabs at his heart.

The particulars of the investigation become more complex, and are best experienced firsthand, but one crucial plot detail turns the narrative on its head. Fed up with the impotence of the police force, Keller kidnaps Alex himself and imprisons him in a house that Keller inherited from his father. He recruits Franklin to assist him in torturing Alex until he provides information on the whereabouts of their children. The two men handcuff him to the fixtures, and beat him in between questions – which he struggles to understand. Keller eventually rigs the shower into a water torture room, pumping in scalding or freezing water in an effort to wrestle his daughter’s location from the man he is certain has taken her.

The brutality of this situation forces the audience to take our evaluation of vigilantism to its logical extreme. Though the situation confronting the Dover and Birch families is terrible and the police response is frustrating, we are absolutely horrified by Keller’s actions (as well as Franklin and Nancy’s acceptance of them). And yet, we feel a tinge of justification on the off chance that Keller’s actions lead to his daughter’s absolution. This does not come from his character or his beliefs, but from the vague feeling that the core of this decision is rooted in good intentions. This is a major theme of Prisoners, as multiple characters seem to have the best intentions at heart, yet effect terrible pain.

As with Enemy, Villeneuve seems more concerned with raising questions than with answering them in this film, and while the ending to Prisoners is not as cryptic in its symbolism, its subtlety is perhaps more effective. If you prefer to keep the ending to this film unspoiled, I encourage you to skip to the final paragraph of this review, as I intend to discuss this ending in detail.

Got it? Okay, here goes:

The final act of the film is a whirlwind of false leads, surprising rescues, and incredible tension. First, the girls are “confirmed” to be dead when their clothes are found in a strange man’s house. But, it is discovered that these clothes were stolen and splattered with pig’s blood. Then, when Eliza escapes and is found by the police, she claims to have seen Keller while imprisoned. This thrusts suspicion on him, but he figures out that the only place she could have seen him was at the house of Alex’s aunt (where Keller went after kidnapping Alex). He goes there, has a gun pulled on him, is drugged, and gets forced into a deep pit in the driveway where the aunt has habitually held her victims. There, he finds a whistle which belonged to his daughter. Eventually, Loki finds Alex in Keller’s torture chamber, and upon returning to his aunt’s house finally puts the whole thing together as well. A gunfight erupts, and Loki finds Anna and rushes her to the hospital.

The terrifying yet subtle moment which ends the film shows the police combing through the aunt’s house collecting evidence. We see the pit, normally covered by just a piece of particle board has had the aunt’s car parked over it as well. The rest of the policemen leave the scene, leaving only Loki in the growing silence . . . until a timid whistle is heard. Loki’s eyes move slightly, and there is clear recognition and understanding in them. The film cuts to black and ends on that beat. The question that Villeneuve has placed before us with the theme of his film is: once Loki finds Keller at the bottom of that pit, does he rescue him? The entire film has dramatized men and women delving to terrible depths in the name of what they considered just. Might Loki, fully aware of the extent of Keller’s depravity, simply close the pit and walk away, leaving Keller to his well-deserved fate? It is impossible to say for sure, but Villeneuve goes out of his way to provide a crucial piece of exposition: it sure is cold tonight.

(Pick it up here all you awesome spoiler-fearers!)

Prisoners manages to be Villeneuve’s grimmest film, which is certainly saying something considering his body of work. Perhaps this is because the film never pretends to be anything more than a look at the path towards evil. Many of Villeneuve’s previous films portray love, strength, and goodness as powerful forces in the fight against hatred, violence, and evil – but Prisoners does not deliver on that theme it at all. It is a quiet, tense contemplation of the road to Hell, so often paved with good intentions.