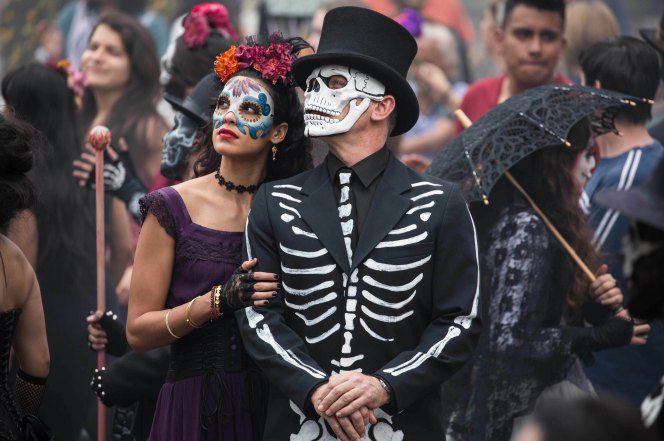 How has James Bond become a poor-man’s Ethan Hunt?

Spectre, the twenty-fourth film of the James Bond franchise, meanders through action set pieces but doesn’t really have anywhere to go. Directed by Sam Mendes, who had much more success with his previous foray in to the world of Bond with Skyfall, the film wastes a potentially great villain by providing no motivation and a cookie-cutter surveillance plot which was done better by both Mission Impossible and Captain America: The Winter Soldier. Sadly, the latest Bond film offers nothing new to the franchise and feels like spinning the wheels in anticipation of the next reboot.

Though Spectre dazzles with a long tracking shot in its cold open, the film never again reaches the heights of this sequence. But it is still worth gushing over this one bright spot. The tracking shot hovers over a large crowd during a Dia de los Muertos parade and quickly focuses on a pair of skeletons (Bond and a nameless beauty). The camera is able to pan between these two and another man, which quickly establishes the cat-and-mouse, stalking nature of this long shot. The shot itself lends to this interpretation; as it stretches longer and longer without cuts, we sense Bond’s determination to catch his quarry. Despite exactly zero exposition, there is palpable tension and importance throughout this sequence – much of which is a direct result of the shot composition and editing choices.

Unfortunately, it is all downhill from there. Very, very downhill.

It is hard to even know where to start once the “story” gets going, but I suppose a look at the narrative is reasonable. M (Ralph Fiennes) is concerned that Bond has overstepped his responsibilities on his trip to Mexico, and then we are introduced to Max Denbigh AKA “C” (Andrew Scott). C is a new liaison from the government who wants to update British Intelligence from the dark days of the Double-O program into a high-powered surveillance cog, so our eyes are on him immediately for “secret badguy” of the film. Bond is ostensibly suspended, but this fails to factor into the narrative at all, other than a bizarre decision to force Q into lying to protect Bond’s globetrotting.

So, as Bond wanders from here to there piecing together clues that eventually lead him to the shadowy Spectre organization, we get plenty of meaningless sex scenes, murders, and car chases that also add very little – but at least we get a brief view of our Big Bad – Christoph Waltz. His introduction is also fairly well done, hiding him in profile and making clear the length of his reach and extent of his intimidation through the way others react to him more than any awkward exposition (generally a weakness in Bond). Again, this is not capitalized upon, as Waltz’s (Blofield) character fails to develop any further. I had to look up the character’s name, by the way, as Spectre somehow manages to make Waltz utterly forgettable – and frankly, replaceable.

Anyway, Bond finds a girl (Lucia, an equally wasted Lea Seydoux) who knows about Spectre, they piece together a location for Blofield and enact the cunning plan of waiting in the desert for a car to pick them up – which actually happens. And they actually get in the car! Lo and behold, Blofield is a master of surveillance (which is power or something) and we have to squirm through the awkward scene of him showing Bond and Lucia a scene that the audience has already seen. It is meant as a sort of “gotcha” moment like when Jafar reveals to Princess Jasmine that Prince Ali is really just the street rat Aladdin – like, to damage Bond in Lucia’s eyes, or perhaps simply to torture her with the true nature of her father’s death. But, it is never established that Bond lied to her – just that she didn’t care how her father died. So, Bond’s anger at the showing of this footage is confusing. Then, the resolution of the scene is just Bond being knocked out by a henchman. So, that’s fun.

To bring it all home, we get both a stupid escape and a rote race-against-the-clock finale to rival Terminator: Genisys in a competition of which climax can make the audience care less. The rag-tage MI-6 crew needs to prevent C from initiating a massive surveillance program which will somehow be devastating. Think the end of Captain America: The Winter Soldier, except replace the threat of instantly murdering all dissidents with the threat of looking at them real hard.

Spectre is wheel-spinning in its most blatant form. Even from just this year, it compares unfavorably to other films in its genre. It is a blander Mission Impossible Rogue Nation, a less clever Kingsman, and more boring Man from U.N.C.L.E – so what does it have to offer? Well, if you’re a die-hard Bond fan, then you may derive some pleasure from a couple of cars and gadgets. And perhaps you can convince yourself that Bond’s back story is developed in a sensible way. But beyond that and the opening sequence, there isn’t much to be excited about. The twenty-fourth Bond film certainly finds itself in the bottom half, but likely doesn’t fall quite as far as Daniel Craig’s worst stint in the universally reviled Quantum of Solace. Still, for stitching together a derivative, boring plot and wasting the talents of Waltz, Fiennes, Bellucci, and other character actors, this is a Bond that aspires towards a classification of “mediocre”.