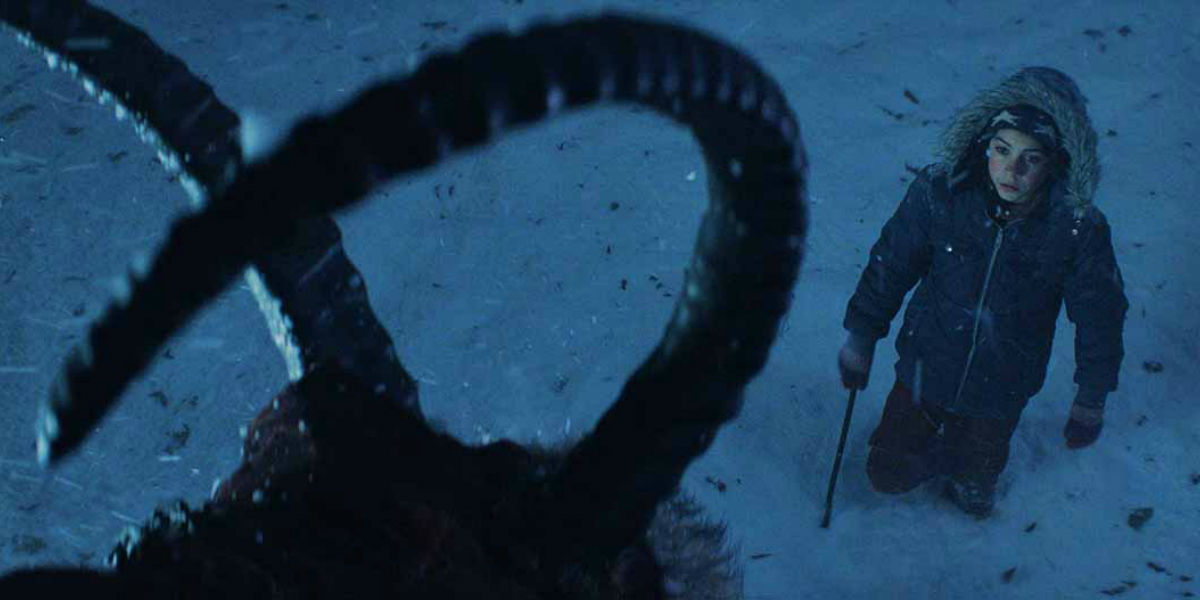 Mashing together a Christmas movie with the horror/comedy genre tends to go poorly. The result is usually hackneyed slasher schlock like Jack Frost or Black Christmas. Capturing the spirit of the holiday season is a difficult thing to accomplish if you’re also trying to establish an appropriate tone where you can alternate between monster attacks and comedy. The gold standard will always be Joe Dante’s Gremlins, but Michael Dougherty has a viable competitor in Krampus. This film succeeds where others fail largely because it doesn’t insist upon offering us a warm-and-fuzzy interpretation of “holiday spirit”. As Krampus shows, there is a much darker side to the holidays.

The film opens with the classic version of Bing Crosby’s White Christmas playing over a rabid group of consumers trampling each other throughout a Big Box Store. This opening sequence instantly establishes the tone of the film: we all want to enjoy the holidays, but sometimes that comes with a great deal of stress. And family doesn’t help, either.

Tom (Adam Scott) and Sarah (Toni Collette) head the Engel family. Their children Max (Emjay Anthony) and Beth (Stefania LaVie Owen) get along pretty well with each other. But when Sarah’s sister’s redneck family arrives (think Cousin Eddie from Christmas Vacation on steroids), the insults start flying and the arguments erupt. Max is teased for the heartfelt letter he writes to Santa, and instead of sending it he tears the letter to pieces and flings it to the icy wind. In answer, a blizzard descends on the Engel household.

This blizzard is the doing of Krampus, a punitive Christmas spirit unleashed by Max’s letter. He has evil toys, anthropomorphic gingerbread men, and twisted elves to do his bidding, but the film follows the standard horror trope of having most family members begin in disbelief until they are confronted with something they cannot explain away. The film indulges in a beautiful animated sequence akin to the Deathly Hallows animation (which was the best part of either of those movies, by the way) as the grandmother explains how she confronted Krampus in her childhood.

This is when the monster attacks happen, and they are all glorious. There is a wonderful mix of comedy (mostly from the gingerbread men kicking ass with an automatic nail gun a la Small Soldiers) and abject horror (the jack-in-the-box creature is genuinely terrifying, and the other critters aren’t much friendlier). In fact, a potential weakness of Krampus is that there are precious few monster attacks; they are mostly relegated to a single scene.

The characters being attacked are all the right amount of annoying and heroic. A couple of them feel a little thin and could have been done away with, especially since their deaths are not particularly satisfying. But these are slight criticisms; the film mostly delivers on its expected tone. It is a bunch of fun, correctly annoying at times with the cousins, and has a few moments of true scariness.

Most horror films set around the holiday season seem to feel the need to justify themselves. So, they frame the story around some flimsy holiday theme of togetherness or warmth or some other forced bullshit. Krampus avoids this pitfall by focusing on the negative aspects of the holidays that are familiar to all of us: rampant commercialism, play-nice with idiot relatives, and terrible weather. Hence, it manages to capture a much darker spirit: the one that sets in four days into your extended family’s visit, or that inspires you to trudge through dirty snow towards that fourth store in a vain search for the new iThing. In this context, Krampus works wonderfully.