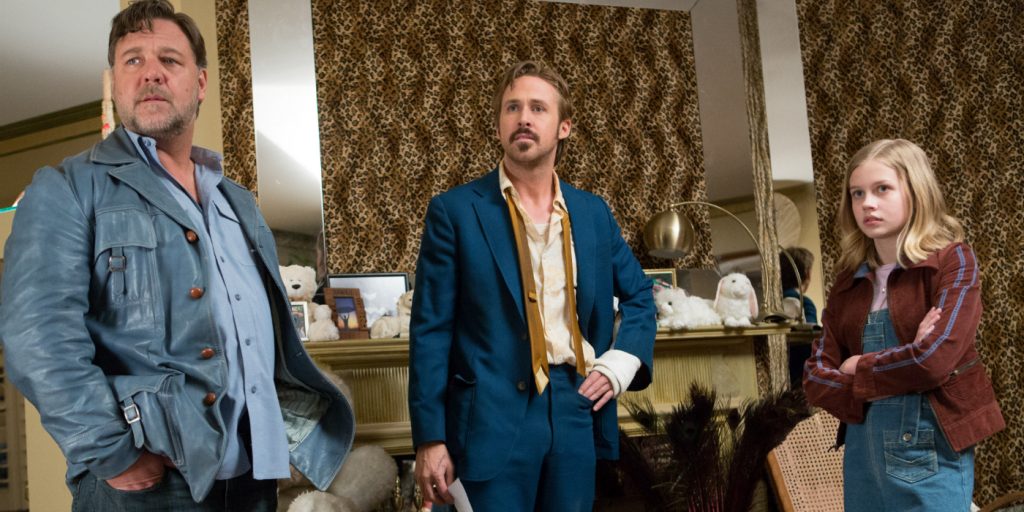 Fans of the crime comedy genre can rejoice, because we’ve been gifted a new masterpiece.  Shane Black’s The Nice Guys is a fun throwback that sports a fantastic mixture of neo-noir and black comedy.  Like the best examples of the genre, the story unfolds through a central mystery while multiple intriguing characters get roped into the proceedings.  Black’s sensibilities take full advantage of the chemistry between stars Russell Crowe and Ryan Gosling, and as a result the film compares favorably to similar movies like The Big Lebowski and Snatch.  Though it may fly under the radar during its theatrical release, it will likely find a cult following once people recognize its high quality and peculiar tone.

First and foremost, The Nice Guys is a film noir that allows itself to relax a little bit, make jokes, and poke fun at the seamy underbelly of 1970s Los Angeles.  Some of the humor is straightforward satire, but it also takes some surprisingly black turns.  One need look no further than the opening sequence of the film, which serves as a kind of cold open.  A pubescent boy pulls a porno mag out from under his mattress and ogles the centerfold Misty Mountains.  Just then, a muscle car crashes through his home, and when he goes it investigate, he finds the object of his fantasy succumbing to wounds from the crash, and suddenly it is all too real.

The story picks up from there as characters close to Misty start hiring different private investigators.  Holland March (Ryan Gosling) is approached by Misty’s aunt, who insists that she saw her niece alive in her apartment two days after her supposed death.  One of Misty’s friends, Amelia, hires another PI named Jackson Healy (Russell Crowe) to keep people off her tail while she tries to lay low in the wake of Misty’s death (which Amelia believes was a murder).  Unfortunately for Holland, he happens to be asking around for Amelia in an effort to get at Misty, and he is roughed up by Healy in a paradoxically funny and brutal sequence.  But, as the case proves to be more circuitous than either man initially thought, they are forced to team up to figure out just what happened to Misty Mountains and why.

March and Healy generate the majority of the enjoyment in this film.  They are compelling and three-dimensional without feeling derivative, and as mentioned previously they have an astounding chemistry, even when they’re at odds.  Russell Crowe and Ryan Gosling absolutely nail their performances, and help Shane Black generate the perfect tone throughout.  But even the smaller performances are noteworthy, and I would emphasize Holland’s young daughter, Holly March (Angourie Rice).  Her performance is an unexpected boon to the film, as she strikes this wonderful mix of shame and pride for her father.  Her character also shows some affecting pathos, and unlike most tag-alongs on these kinds of crime stories, I was actually happy that we weren’t just leaving her at home.  To her credit, she is able to compete with these seasoned actors in both dramatic and comedic sequences.

Thematically, the film flirts with some very bleak undertones, reflecting the hopelessness of trying to effect systemic changes from the street-level.  That being said, the protagonists display such enjoyment while on the investigation that we’re encouraged to look past the cynicism.  After all, Private Investigation work suggests a blue-collar search for truth and integrity in the face of established and well-funded evil, which has always been a hallmark of the noir genre.  But, this isn’t Chinatown with its soul-crushing depression – it’s more like Snatch with fewer characters and more focus.  Though the protagonists’ actions may ultimately prove to be facile, that doesn’t make their fight unworthy of a pair of rough-around-the-edges champions.

Is it possible that someone reads my blog and saw The Nice Guys in theaters?  If so, what did you think about it?  Are you a Shane Black fan, or are you one of the people that hates him for “ruining” Iron Man 3?  What about The Predator sequel he is working on next – does that excite you at all?  Remember to comment, share, subscribe, like the Plot and Theme page on Facebook, and follow on Twitter and Pinterest!