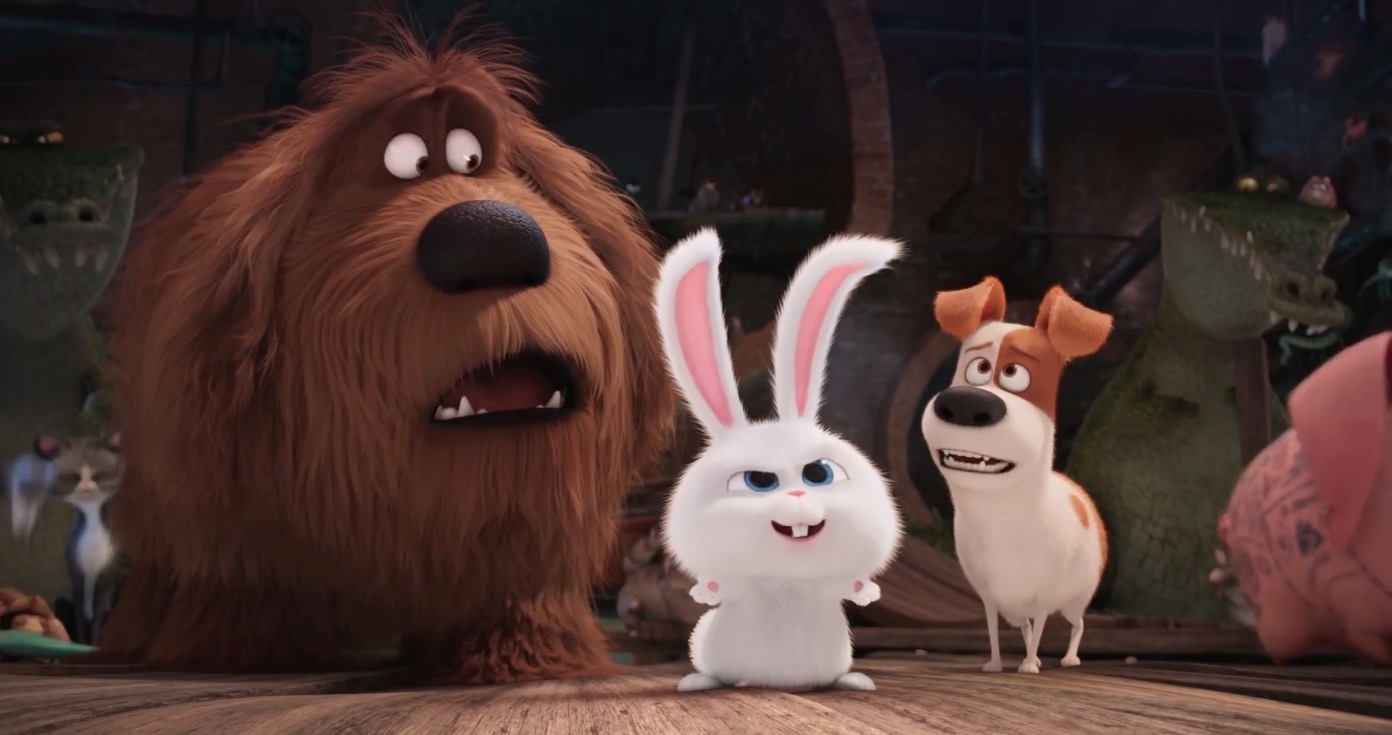 The Secret Life of Pets, from Illumination Entertainment, occupies a strange space in the world of animated films.  The movie is a cut above the slapstick-and-farts formula of the most childish entries (I am looking at you, Ice Age 5).  It even avoids the over-reliance on pop culture reference to get chuckles out of the tag-a-long parents who are invariably forced into the seats in the theater.  But, it is disappointing that the best part of the movie was entirely revealed in the trailer — the teaser trailer!  That’s right, those 2+ minutes that introduced us to The Secret Life of Pets function as the cold open of the film, unchanged.  And they are still probably the best part of the whole movie.

Once it actually gets going, the narrative pulls the audience in too many directions at once.  It is rarely (if ever) clear who is the villain and whether they will stay that way, and this leads to incredibly haphazard storytelling.  We’re left with something between a mess of isolated skits and a fully-formed linear narrative, and it is difficult to pull a coherent theme from the film beyond, “friendship is good”.  Still, The Secret Life of Pets does enough right to avoid leaving a poor taste in one’s mouth, but will never be considered a peer of the more expert-crafted animated films from this year.

The basic plot of The Secret Life of Pets focuses around a forced conflict between the main protagonist, a terrier named Max (Louis C.K.) and the new dog that his owner Katie brings home, Duke (Eric Stonestreet).  As the two struggle to adjust to the living arrangements, both dogs come off as insensitive jerks.  It is grating, and feels like the laziest means to generate conflict.  Eventually, Duke tries to abandon Max on the streets of Manhattan while the two are out with the dog walker, but Duke is caught in his own trap – first by a band of street cats, and then by the standard villain of all dog stories:  Animal Control.  Once Max and Duke don’t come home.  This is only noticed by Gidget (Jenny Slate), a puffball who s in love with Max, and not the human who is responsible for walking the dogs.  The writers attempt to answer this by showing the dog walker in a state of distraction while vainly counting the dogs in his custody, but it is hard to believe he wouldn’t notice that he was two dogs short when he came to Katie’s home.

Anyway,  Gidget effects a rescue party for Max, and spends the next hour or so assembling a team to find her lost crush.  Meanwhile, Duke and Max are rescued from Animal Control by a band of street animals which hate humans / owners, led by a bunny named Snowball (Kevin Hart).  For such a by-the-numbers plot, it is tortuously difficult to figure out who is the villain at any given time, and there are a lot of unnecessary characters which contribute little to the movie.

There are a lot of characters in The Secret Life of Pets, but only maybe four have actual characteristics or arcs that make them stand out from the crowd.  Max and Duke are undoubtedly the main protagonists, but as I mentioned previously they can be real jerks to each other sometimes, so it can be hard to root for them.  Gidget is probably the most well-developed character, and is certainly the one with the most clear and earned motivations.  Finally, there’s Snowball, who heads the strays gang.  While his maniacal personality is successfully played for laughs throughout the film, he fails utterly as any kind of villain or actual impediment to the journeys of Max, Duke, or Gidget.  Instead, his motivations flip-flop, and there is also a startling lack of drive from his character.

I can appreciate that Snowball could be viewed as a flawed creature, pained by past abandonment, so maybe it is wrong to consider him as a true “villain” of the story.  In that case, though, all we have left as barriers to our protagonists are the Animal Control people who have about 5 minutes of screen time (if that).  That these under-developed characters meander through a cookie-cutter plot is probably the biggest problem with the film, and I think that the four screenwriters and two directors may be the main cause of such a slapdash narrative.

It certainly doesn’t help that all of the ancillary characters are thin and uninteresting.  Most of the other dogs are disposable, as evidenced by the fact that they do absolutely nothing for the plot.  The two bird characters are likewise confusing:  one is a tiny bird that is the only animal in the film that doesn’t talk for some reason, and the other is a hawk that is constantly trying to eat everything smaller than him.  The hawk, voiced by Albert Brooks, is at least important to the plot in that he leads Princess to the strays gang.  The gang itself is also populated by disposable non-actors.  It’s like The Secret Life of Pets decided that quantity was more important than quality with regards to characters.  The result is an overly-complex cast which suffers for lack of something to actually do in the story.

I think the reason for this kind of set-up is derived from something I have mentioned before:  the best part of the film is the cold-open, which doubled as the film’s teaser trailer.  There, you see a number of different pets and how they behave when their owners leave for work, and it is absolutely wonderful.  The film expertly captures the quirky behaviors of our pets, and that the strength of the film.  Of course, this necessitates two things:  many characters with which to portray these familiar behaviors, and short vignette-like sequences to show them.  The cold open is perfect for this.  But, when one attempts to stretch this concept to the length of a feature narrative structure, the wandering focus botches the execution.

Sometimes, The Secret Life of Pets finds this magic again in a isolated wayward moment  (usually involving the cat, naturally), but in general it is lost in the crowd of broad characters and a narrative without much to say.  The Secret Life of Pets is a movie that inherently fails to live up to its trailer:  the power of the comedic techniques and character-development moments works in 10-second bursts, but as soon as the film makers try to actually tell a story, it is clear they are hindered by the broadness of the characters they had to invent to play in their sandbox.  This results in a disappointment with this film generally reserved for live-action comedies:  unfortunately, if you’ve seen the trailer, you’ve seen the best part.