Today, words are exceedingly lightweight.  You can say whatever you like because words are as substantive as foam to us.  That’s no more than a reflection of how empty our reality has become.  And yet even now, the truth is that words are power.  It’s just that we’re meaninglessly drowning in a sea of powerless, vacuous words.

Hayao Miyazaki is an animation adept, and his masterpiece is Spirited Away.  The writer/director fully flexes his world-building muscles in this film, and crafts a wondrous world of spirits for his protagonist Chihiro.  Amidst this fantastic world, Miyazaki tells a stunningly realistic story:  that of the burgeoning personality of a young girl.  Simultaneously, Miyazaki hides multiple thematic messages in the film, which range from economic commentary to the power of words.  The film is also technically impeccable, featuring gorgeous animation that is especially eye-catching during the moments when the traditional 2D cel animation is augmented by CGI.  The soundtrack doesn’t fall far behind either; it controls and comments on the onscreen action, like something out of an opera.  These attributes transform Spirited Away from a fanciful distraction for children into a full-fledged cinematic masterpiece, both aesthetically and thematically.  It is rare to glimpse such sublime cohesion.

Spirited Away begins with a languid 10-year-old girl named Chihiro (Rumi Hiiragi) laying across the backseat of a car, mired in the middle of a move to a new town. Chihiro is not interested at all in the move, and paws over a farewell note from a friend and some wilting goodbye flowers that she holds a little too tightly.  On the way to their new home, the family stumbles upon an abandoned theme park built in the late 1990s.  Chihiro’s father finds an untended smorgasbord and suggests that the family eat.  Chihiro is nervous, afraid that they are doing something wrong, but the parents gorge themselves. 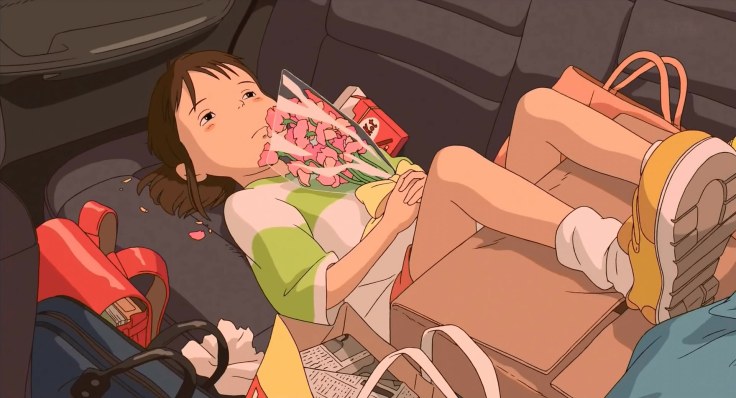 Chihiro goes exploring, and eventually runs into an older boy named Haku (Miyu Irino).  They are startled to see each other, and Haku immediately warns her that this is not a place for humans, that she must cross the riverbed before the sun sets.  Alas, she is much too late.  Not only has the sun set, revealing the amusement part to be a bazaar populated by fantastic spirits of all shapes and sizes, but Chihiro’s parents have been transformed into pigs! 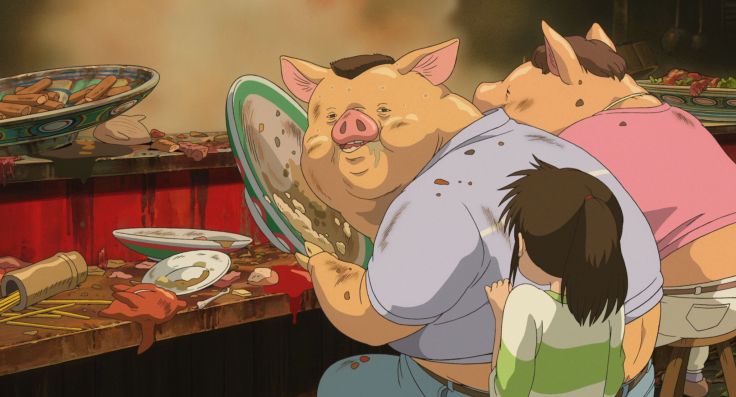 As she reels from this revelation, Haku hides Chihiro, feeds her some spirit food to stop her from disappearing, and tells her exactly what she must do survive:  ask for a job.  With a job in the bathhouse, she can’t be kicked out of the Spirit World.  No matter what the Sorceress Yubaba (Mari Natsuki) says to trick her – Chihiro just keeps asking for a job.  Eventually, she signs a contract with Yubaba, trading her name for a new one, “Sen”, and the right to work.  Thus, after a slightly circuitous journey to meet Yubaba, Chihiro begins working in this bathhouse for spirits.

From here, Chihiro is challenged with bizarre customers, prejudiced spirits who don’t like how humans smell, and wondrous magic that she can’t quite understand.  She must tend to her duties, but is also on the lookout for some way to rescue her parents and escape the spirit world once-and-for-all.  Haku will assist her, but he has his own problems to deal with also.

The world-building displayed in Spirited Away is unparalleled.  It is at once fanciful and grotesque, yet seems to follow some internal logic.  It has a feel reminiscent of Western classics like Disney’s Alice in Wonderland, but less absurd and more mythical; or The Wizard of Oz, but less linear and more free-floating in its narrative.  Most of what occurs in the bathhouse is left unexplained in any explicit way.  Mostly, Miyazaki is content to simply show the audience the wonderment of the world and let it unfold in weird ways.  It is a master class in the “Show, Don’t Tell” philosophy of storytelling, and leaves much open to the imagination of the viewer.  It’s spectacular.

Then the animation.  With all apologies to the experts over at Disney, Spirited Away boasts perfect animation, perhaps the greatest cel animation ever seen in a feature-length film.  (I will entertain arguments for Beauty and the Beast and Pinocchio from Disney, and Miyazaki’s own My Neighbor Totoro, but that is beyond the scope of this piece).  The technique is flawless, the aesthetic vibrant, and the visuals are spellbinding.  Whether you’re taking in the gorgeous backgrounds or focusing on the smallest detail, the animation is simply impeccable.  Miyazaki also employs CG animation at certain points (see below), and it somehow manages to inject the film with an additional sense of wonder.

This is also a story that can only be told through animation – live-action simply wouldn’t work here unless it was heavily augmented by CGI, and even that could be dodgy.  The denizens of the spirit world are brought to life by the astounding animation, and much of the magical nature of the story also looks fantastic.  Obviously, it is possible to do amazing things with CGI now, but I think it would be almost impossible to succeed with a live-action Spirited Away.  The whimsy and beauty of the film simply lends itself to animation too perfectly.

On another technical note, you will not find many animated films with such powerful and important music.  True, many of Disney’s masterpieces are musicals, but sometimes they lean a little bit on the strength of the actual songs.  Spirited Away contains no songs per se, but it uses musical cues straight out of an episode of Merrie Melodies.  As a modest example, when Chihiro is walking down the long flight of stairs to the furnace, each step is accompanied by a musical note.  It is almost as if Chihiro needs the musical tones to encourage her along.  Other sequences, most notably the “stink spirit” encounter, also exhibit an expert control over the soundtrack.  It’s that little addition that you wouldn’t notice if it was missing, but because it is done so well, it improves the film quietly.

All of this technical prowess is in service of a beautiful and under-represented story about a young girl.  Long before Inside Out concerned itself with the burgeoning personality of a preteen girl, Spirited Away explored this wonderful story about a ten-year-old girl transitioning from a disinterested, gloomy child into a self-directed, fully capable individual.  Ultimately, this is the overarching theme of Spirited Away:  growing up, accepting responsibility, and taking volition over one’s own direction in life.  As is so often the case with these kinds of transitions, this happens gradually to Chihiro and slowly builds into a bursting floodgate by the end of the film.  Chihiro has grown into a sovereign individual mature enough to make important choices, and eager to grow into her personality.  It is for this reason that she is able to effortlessly recognize that her parents are not among the pigs in the film’s finale.  She has learned, grown, matured.  With her newfound experiences and worldview, Yubaba’s trick is obvious.

Equally impressive are the myriad subthemes that Miyazaki sneaks into this masked coming-of-age tale.  There are multiple references to the “Bubble economy” of the late 1990s and representations of the greed that Miyazaki attributes to the economic struggles.  The very first of these occurs in the first ten minutes of the film as Chihiro’s father explains that the boom was responsible for the production of many of these theme parks – and the bust responsible for their abandonment.  Chihiro’s parents transforming into pigs is a clear metaphor for greed, excessive consumption, and short-term pleasure seeking, all of which are vices that accompany a bubble economy.  These kinds of vices are not reserved for the humans either, as the spirits working in the bathhouse also succumb to material pursuits, most notably in relation to the gold nuggets offered by the No Face.

Another subtheme should be immediately apparent to fans familiar with the other works of Miyazaki:  the ruination of nature in its pristine state by humans.  But, instead of the directness with which Miyazaki approached this theme in films like Princess Mononoke and My Neighbor Totoro, here he simply takes a single sequence and leaves the interpretation to the audience.  When Chihiro finds the bike handlebar lodged in the stink spirit and Yubaba springs to action after recognizing that he is actually a spirit of an old river, you get a profound  marriage of subject and theme.  Once the workers at the bathhouse free the river spirit of all of its refuse, there is no heavy-handed reference to, “wasteful humans” or littering or anything like that.  It is just left there for the audience to ponder.  Such restraint is welcome and wonderful to behold.

The last subtheme I will mention that Miyazaki throws into this story is referenced in the quotation which led this piece:  the power of words, especially for control over others.  In Spirited Away, this takes the form of Yubaba’s magic contracts, which literally control a person by taking their name and giving them a new one.  This has happened to Haku in the past, and we see it happen to Chihiro when she becomes “Sen”.  It should be noted that Miyazaki places this concept front-and-center in the Japanese title of the film, Sen to Chihiro no Kamikakushi, which translates to “Sen and Chihiro’s Spiriting Away”.  Clearly, Miyazaki means to place importance on this name changing, as there are also multiple plot points that ensure that Chihiro remembers her name, and she also is able to remind Haku of his original name.

There are multiple subtle ideas at work here simultaneously.  There is the basal concept that words can have power over a person (especially a person’s name; see: Rumpelstiltskin), but there is also the idea that one cannot hold sovereignty over one’s own life if their name is taken.  This kind of thing has been explored in pieces like Roots, where Kunta Kinte becomes Toby, and thus has his cultural identity replaced by abject subservience.  Nothing quite so bad happens to Yubaba’s workers, but the argument is the exact same:  there is power in names, and those in control can exploit that power.  It is impressive stuff for a “kid’s movie”, and further confirms that Spirited Away is a cut above.

Taken together, these attributes result in an unqualified masterpiece.  Spirited Away isn’t just beautiful animation.  It isn’t just a piquant setting with a necessary story.  It isn’t just perfect music, world-building, and voice acting.  It is all of those things simultaneously, relevant themes in a gorgeous package.  Most crucially, at the end there is no good and evil.  There is no titanic struggle for Chihiro to overcome in a blaze of glory.  Much like the challenges we face every day, there is no celebration and precious little fanfare.  At the end, Chihiro has simply learned a small but poignant truth about herself and the world she lives in.  Her magnificent journey is complete, and she is better for it.