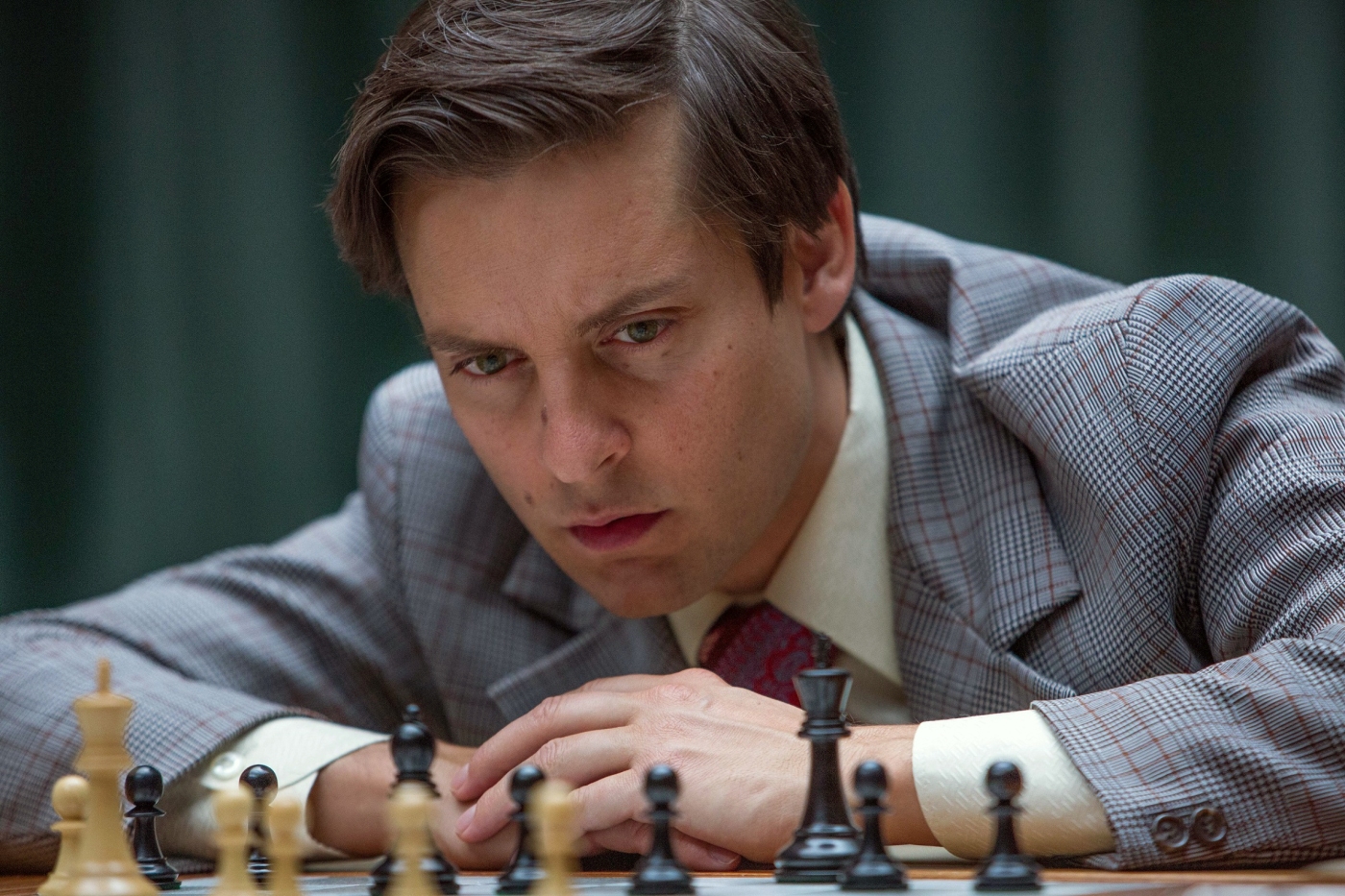 The name “Bobby Fischer” is synonymous with high-level chess, even decades after the Brooklyn-born grandmaster won his World Chess Championship match against the reigning champion from the Soviet Union, Boris Spasskey.  Staged during the height of the Cold War, the match was seen by both sides as an opportunity to prove intellectual superiority.  Pawn Sacrifice dramatizes this iconic battle-of-wits, but also delves into the psychological effects of obsession, dedication, and the heavy burden of worldwide expectation– even on the strongest of minds.

The film opens in Reykjavík, Iceland in the middle of the Championship match in 1972, with Bobby Fischer (Tobey Maguire) tearing apart his room in search of Russian spying devices.  As will be a common theme throughout the film, Fischer’s mastery of chess is depicted as a double-edged sword:  the price of his prowess over the board is this uncontrollable paranoia and bizarre psychopathy.

Flash forward to Fischer as a young child, and the story of his ascent to becoming the world’s youngest international grandmaster.  Very little of this portion is dramatized.  Mostly, it is the standard fare of the prodigy – showing talent, surprised entrenched professionals, and then a lot of early success.  The narrative of the film truly starts when an adult Fischer retires from the world of professional chess in protest over poor tournament protocols that (he believes) allow the Russians to collude and elbow him out of the competition.

Enter Paul Marshall (Michael Stuhlbarg), a jingoistic lawyer intent on helping Fischer prove than an American can best the Russians in chess.  Fischer selects a former Junior Champion and current priest William Lombardy (Peter Sarsgaard) as his second, and the team start their assault on the Russians, with the goal of challenging for the World Championship against Boris Spasskey (Liev Schreiber).  As Fischer tallies victories against some of the highest-rated Russians in the world, he earns celebrity status across the world.

Though focused on chess, Pawn Sacrifice is a character study more than anything.  The film is quick to characterize Fischer as suffering from psychological issues, and it is not shy about placing them front-and-center.  Fischer is a fidgety, complaining mess most of the time, insistent that all of his demands are met, as though he is God’s gift to chess.  Losing to Spasskey in the finals of a promotional chess tournament, Fischer is a petulant child in defeat, barking at reporters that even if he explained to them why he lost, they wouldn’t understand it.

Tobey Maguire’s performance of Fischer is quite solid.  You’re often annoyed with the character, and sometimes horrified by the depths of his psychosis (and the willingness of those close to him to look the other way for “the greater good” of his Championship bid).  There’s also a level of pity surrounding Fischer, as all of his genius over the board means nothing when his mind crumbles under the weight of paranoia, conspiracy, and his fear of failure.  Maguire easily adopts Fischer’s frantic affect, a mixture of supreme confidence and world-crushing insecurity.

The three supporting performances are also superb.  As always, Peter Sarsgaard is amazing.  He provides the audience with the proper chess context during the film, always able to explain Fischer’s moves  and strategies to others (and thus, the audience). Though obviously not Fischers’ full equal, he is more grounded in the real world than Bobby is, and is one of the few people who will not put up with his absurd demands.  Michael Stuhlbarg is similarly strong.  He is able to walk a peculiar line between being a manipulator of Fischer and a babysitter, because from his point of view America superiority lay in the balance.  Nonetheless, Stuhlbarg often allows that subtle sense of pity to shine through in his performance, as he is both dazzled by Fischer’s mind and painfully aware of how thoroughly the chess master is shackled by it.  Lastly, in a small but crucial role as the competition, Liev Schreiber is perfect.  He acts as Fischer’s counterpart not only over the chessboard, but as a giant intellect beset by outstanding forces.  Eventually, Spasskey starts to mirror Fischer’s paranoia, cementing the idea that absolute mastery over a subject can indeed by a deep rabbit hole.

The film handles the actual playing of the chess quite well.  As mentioned, Peter Sarsgaard helps the audience understand the basics of what is going on, and seasoned chess players are going to recognize a lot of advanced chess vernacular.  Stylistically, the film usually shows the mindset of chess though basic notation hovering over the board in small bits of illuminated script, but this is used only sparingly.  Fischer’s match with Spasskey is also reasonably true-to-life, though there are a couple of artistic liberties taken.  Regardless, kudos are owed to the costuming and set design especially, as the actual match in Reykjavík looks perfect.

Pawn Sacrifice is an apt title for Bobby Fischer’s story, laden with many levels of meanint.  One can certainly understand the tremendous sacrifice that Fischer makes to become the best chess player in the world, and very often characters in the story inform us that his devotion to the game likely exacerbates his underlying mental issues.  From another angle, Fischer himself can be seen as the sacrificial pawn:  one piece in a gigantic game between world superpowers.  It is doubtless that Fischer would have pursued dominance over the Russians on his own accord, but fighting for “The Free World” added significant pressure, expectation, and celebrity to the trial.

As the closing title cards inform us, Fischer went into seclusion and never defended his world title, though he would emerge into the public eye briefly over the rest of his life.  When he did, his extreme political views, paranoia, and penchant for conspiracies had not abated.  Pawn Sacrifice is a story of triumph, but also one of tragedy.  Fischer’s victory over the Russians came at a great price:  the brilliant chess mind that made it all possible.