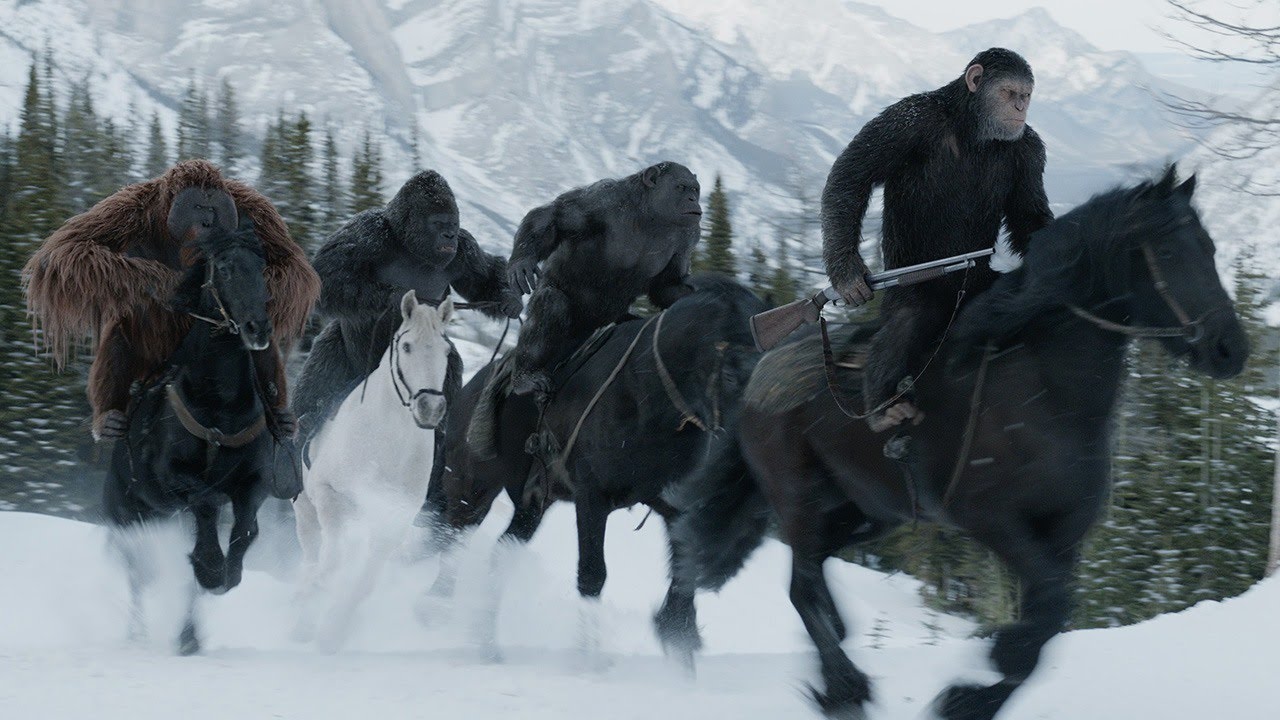 War for the Planet of the Apes picks up a few years after the previous film, opening with a stylized text scrawl that explains the previous two films using the words “Dawn” and “Rise” (and highlighting them in red), then sets the table for this film by highlighting “War” in a third scrawl. It’s a cute technique for pulling off the requisite exposition without feeling too cheesy or heavy-handed.

From there, we get a quick battle scene between the humans and the apes, and are re-introduced to Caesar (Andy Serkis), the leader of this troop of apes. This being a movie with “War” in the title, bad things happen to Caesar and he breaks off from the group to seek revenge on the baddy what did the things to him – a human general played by Woody Harrelson. Caesar does some good hunting and eventually finds out where the general is staying, but there are some surprises along the way, including a bizarre sickness that seems to be robbing humans of their ability to speak.

As has always been the case in this trilogy, the motion-capture performances are the best there’s ever been ( each is better than its predecessor, which was the best in history).  Always powerful, always astonishing. Earlier this year, Disney’s Beauty and the Beast live action remake had a Beast that looked like hot walking furry garbage in some shots. Caesar and the other apes always look wonderful, and they have to do a lot more in terms of conveying genuine emotion. From the human side of things, the most notable normal performance is from the aforementioned Woody Harrelson, who absolutely crushes it.

The film strikes a balance of tone that is impressive. This is a movie that can be funny, heart-breaking, spiritually rousing, grim, and full of epic battle sequences. It hops between these without feeling misshapen or inconsistent. Mostly, it is on account of director Matt Reeves understanding how to keep the serious stuff feeling genuine while allowing the funny stuff to give the audience a chance to breathe in between action scenes.

There are some solid science fiction elements in the film, too, many of which can be mined for allegory (like the best science fiction). The aforementioned virus that robs humans of their ability to speak, the post-apocalypse landscape where apes and humans are just trying to find a way to survive, and the renegade general forcing the slave-apes to build a wall all add thematic wrinkles to the standard summer blockbuster.

The film also adopts an old-Hollywood kind of feel to it. The orchestral score is very forward in the soundtrack, and the musical cues hit hard, often lacking any kind of subtlety. Sometimes it even verges on cloying or patronizing. This is especially recognizable when the cue establishes an emotional mood before anything even happens on screen. So, sometimes this gets annoying – but usually the movie pulls it off.

While we’re nitpicking a bit, War for the Planet of the Apes is yet another example that Endings Are Hard. The big climax is fairly predictable, but then there are some extra beats that just feel a little stupid and unnecessary. The final moments, though poignant, also stretch the suspension of disbelief just a tad too far. None of these things are deal-breakers, nor do they mar the film in any meaningful way. A slam dunk of an ending would have cemented this film as the best of the new trilogy, but it seems like Dawn won that title by a nose.

I opened this piece by insulting the first film in this rebooted trilogy, and Rise 100% deserves it. It’s a silly film elevated to watchable due to the strength of the motion-capture performances, especially the one turned in by Andy Serkis. The second and third films, both directed by Reeves, play up these performances by presenting believable ape characters that are multi-dimensional, empathetic, and realistic. On the strength of these characters and the gorgeous way they are rendered by cutting-edge technology, the Apes trilogy is a resounding success.