In Dunkirk, Christopher Nolan tells three inter-twined stories of differing lengths and at different speeds, showing how the terrors of war and heroic acts associated with it can exist on various time scales. There are instantaneous acts of heroism, the bread and butter of war films, but also more considered, lengthy heroics on day or week-long scales. Nolan ties them all together by interweaving all three timelines into three separate but related stories of the Battle of Dunkirk. This structure is the overwhelming brilliance of Dunkirk, but Nolan also manages to pack each story line with startling action film-making on land, sea, and air. The result is a masterwork of structure, pacing and storytelling, replete with themes of warfare, heroism, and the true meaning of victory.

The Battle of Dunkirk is shown three times, on three separate time lines. The longest lasts a full week, as Allied soldiers wait on the beach at Dunkirk, trapped by the German forces slowly advancing on them. The second takes place in the final day of this week, and documents the trials of a boat called to sail to Dunkirk and effect a rescue of the soldiers along with other civilian vessels. The final story contains only a single hour of this day, and follows three pilots tasked with providing air support for the men on the beach and the civilian fleet. The story of Dunkirk therefore compresses as it is told, drilling down from Land to Sea to Air, culminating in a final flurry of activity as the three separate stories converge on the beach. Each story has its point to make, and each details the horrors of war in its own particular way.

A Week on the Beach

As the German forces funnel the Allies onto the beach at Dunkirk, the avenues of escape are reduced to one: the sea. Unfortunately, the waters at Dunkirk are shallow, and there is only a single pier from which to evacuate. What’s worse, should the German bombers destroy a vessel in their attack, the corpse of the ship will litter the waters, making further rescue attempts even more difficult, even impossible. We are privvy to the sinking of one of these ships, witnessing the drowning of hundreds and the dooming of thousands more as the noose tightens on the men at Dunkirk.

Thus, the logistics of evacuating hundreds of thousands of soldiers prove tortuous for Commander Bolton (Kenneth Branagh). With each successful bombing raid by the Germans, the inevitability of the situation begins to dawn on the soldiers. Few of these men will make it off the beach, and their only option is to wait for some slimming chance at salvation. Some men make it on a ship, only to be washed back ashore as it is destroyed by a German U-boat. Others look to commandeer abandoned vessels and make a run for it themselves, only to find themselves trapped by low tide and some German soldiers using the “abandoned” vessel for target practice.

But ultimately, the fates of these men will be determined in another arena. The impotence, the powerlessness, the certainty that one’s life is outside of one’s own control is a major theme of this section. For some men, this realization is too much – they are seen donning their gear and walking into the sea.

A Day at Sea 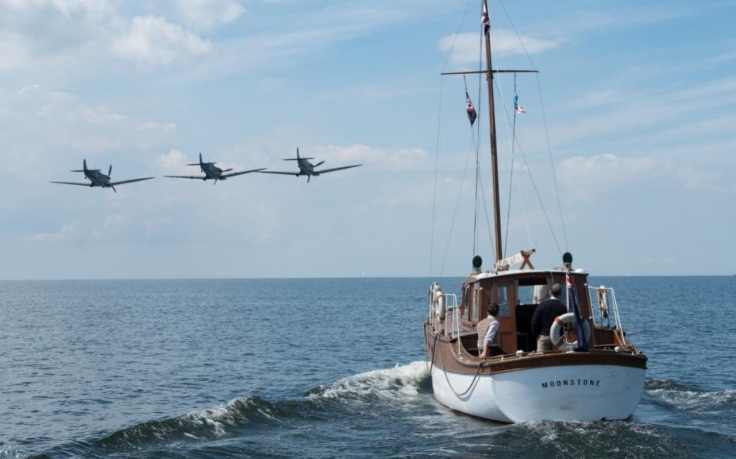 In a last-ditch effort, Churchill issues an order to requisition civilian vessels within range of Dunkirk to assist in the evacuation of the beach at Dunkirk, with the hopes of saving at least 30,000 men. Mr. Dawson (Mark Rylance) and his son Peter (Tom Glynn-Carney) answer the call aboard their vessel Moonstone and their teenage friend George (Barry Keoghan) hops aboard at the last minute. At sea, they encounter a soldier who survived the sinking of one of the ships from Dunkirk, as well as a few German bombers. Mr. Dawson is an adept seaman, and knows a few tricks for dodging the German fire. He is even able to rescue one of the English fighter pilots.

This section is full of minor acts that add up to a triumphant piece of heroism, but it isn’t without tragedy. Through the character of the marooned survivor of a German attack (Cillian Murphy), we understand the psychological effect of warfare at sea, of struggling to escape a sinking ship where every breath could be one’s last, and of the overpowering fear that develops when one comes so close to death. And yet, amid these grave possibilities, common men will still answer the call.

An Hour in the Air

Finally, as all events compress into a climactic hour, the final story line follows three Spitfire pilots tasked with providing air support for the civilian fleet and the men at Dunkirk. The leader is shot down during a dogfight, so Farrier (Tom Hardy) assumes command. He jots down the time in chalk next to his damaged fuel gauge communicates with his partner to provide an estimate for how long he can stay in the air. In this shortest storyline, time is everything. Farrier only has so long before he must return home, yet every minute of his air support is precious to the men he is protecting. This section details the heroism of expedience, of making the split-second decision between one’s own life and the lives of others.

Each section, indeed practically all of the plot, is told in first person, often through literal point-of-view shots. The exposition in minimal, the dialogue sparse. Mostly, the story is told through visuals, observations, the eyes of these characters. The film opens with just such an instance: fliers litter the streets, and a character picks one up: “Surrender, We Have You Surrounded” – a piece of German propaganda meant to sap the will to fight from the allies. There’s no need for droning exposition, explanation, anything. This kind of storytelling also has the palpable effect of throwing the spectator alongside these characters, in each and every arena and situation. Coupled with Nolan’s prowess for action filmmaking, which may have reached a zenith in Dunkirk, the result is a harrowing war-torn experience.

Nolan has often played with story structure in his films, from Following and Memento right up through Inception and Interstellar, but with Dunkirk he has done something special. This “Land, Sea, and Air” approach to the story allows Nolan to repeat events, showing them from different perspectives or on different time scales. We see decisions in new lights, or appreciate the mindset of characters differently given these repeat viewings. This also allows Nolan to compress the tension of the story at certain crucial moments, transitioning from the protracted inevitability of the men on the beach to the flitting and break-neck decision making of the Spitfires.

Without a masterful control of pacing, plot, and structure, such an approach could easily fall into disarray, but with Nolan at the helm, exercising tight control of the story, this is never a real danger. Indeed, Dunkirk is Nolan’s shortest film besides Following, his very first. Dunkirk is tight, principled, and impeccably controlled. It is undoubtedly one of Nolan’s finest.