In Dunkirk, Christopher Nolan tells three inter-twined stories of differing lengths and at different speeds, showing how the terrors of war and heroic acts associated with it can exist on various time scales. There are instantaneous acts of heroism, the bread and butter of war films, but also more considered, lengthy heroics on day or week-long scales. Nolan ties them all together by interweaving all three timelines into three separate but related stories of the Battle of Dunkirk. This structure is the overwhelming brilliance of Dunkirk, but Nolan also manages to pack each story line with startling action film-making on land, sea, and air. The result is a masterwork of structure, pacing and storytelling, replete with themes of warfare, heroism, and the true meaning of victory.

END_OF_DOCUMENT_TOKEN_TO_BE_REPLACED 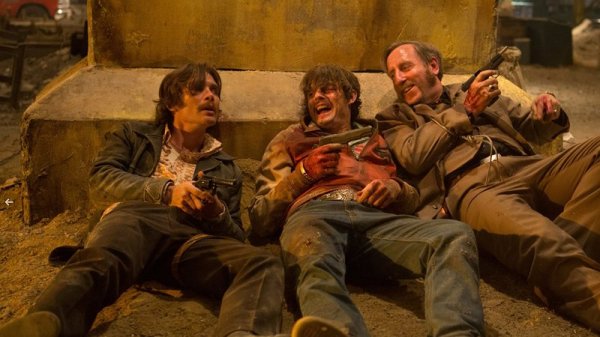 In a strange paradox, executing a proper farce demands preternatural planning.  Stray but a little from the knife’s edge, and the tone can spiral out of control as the conflicting elements of the film separate like a broken sauce.  Ben Wheatley’s Free Fire suffers such a fate, though it isn’t for lack of effort or a gripping central idea.  The film tries to position some idiosyncratic characters in a bottle, shake everything up, and let them shoot guns at each other for 75 minutes, but too many of these elements are just a bit off the mark.  The characters and the performances mostly hit, and the inciting event feels reasonable, but the organization and the length of the fight strains comprehension and ends up being to repetitive to hold the spectator’s interest.  Free Fire does a better job than most genre-bending farces, but ultimately it just feels too boring for a movie centered around a free-for-all firefight.

END_OF_DOCUMENT_TOKEN_TO_BE_REPLACED

I’ve got a pair of sweet trailers here, and they both look like high-octane, shoot-em-up action flicks, though they have wildly different tones.  Free Fire is going to be the first to hit theaters, and features an insane collection of talent along with a humorous concept.  Baby Driver is similarly stocked, and an Edgar Wright film is always worth checking out – especially given the recent hype coming out of the South-by-Southwest (SXSW) Film Festival.  Fortunately, we’ve got some trailers to hype us up.