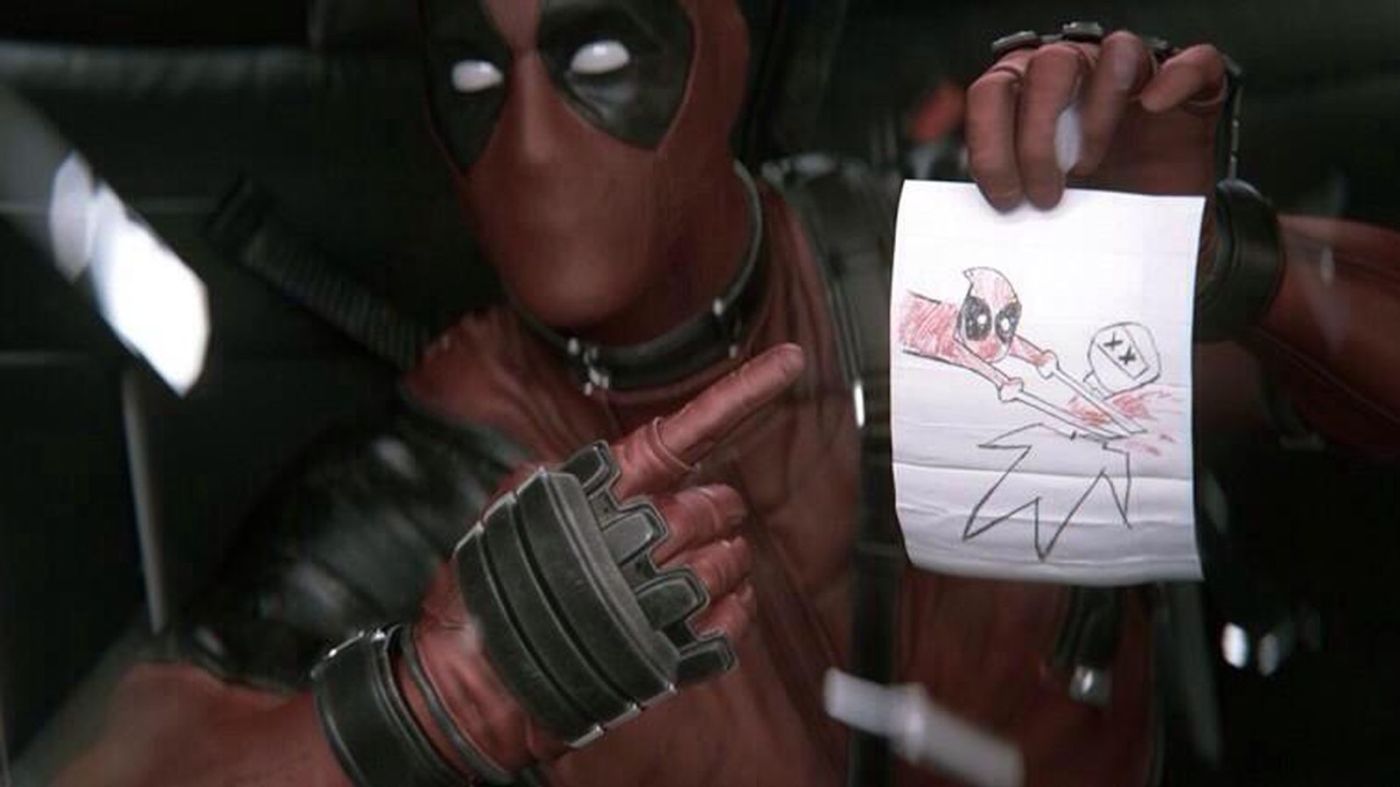 So first off, sorry to everyone who reads this review. I wanted to make it worthy of the Deadpool movie, but I don’t think that is going to be a reasonable possibility. Regardless, I will press on and gush all over almost everything about this movie in that annoying way that over-excited movie critics do. Hopefully, by the time I am done you’ll be sufficiently bored with my analysis that you’ll go out and see the film for yourself and start annoying your own friends with how good Deadpool is. Circle of life.

First a little background. The character of Deadpool has been around since the early 1990s when he was first introduced in an X-Men offshoot comic. It took a little while for him to get a fully-fleshed out backstory, but he was a fan favorite almost from the very beginning. Deadpool is Wade Wilson, a mercenary riddled with incurable cancer. Through the same Weapon X program that created Wolverine, Wilson is gifted mutant healing powers that keep his cancer at bay. They also drive him insane, to the point that Deadpool recognizes that he is a character in a comic book, and routinely drops pop culture references and breaks the fourth wall by talking directly to the reader.

Everything about the character of Deadpool is absolutely perfect for a self-referential, hard-R comic book movie, and the marketing campaign for the movie took full advantage of this fact. If you’re not familiar with any of these materials, then allow me to welcome you out from under your rock, buried in a cave, on Mars. From the “leaked” test footage, to the first trailer, to the spot on the TV show The Bachelor, to the 12 Days of Deadpool online advent schedule, every single bit of marketing was fantastic. This type of campaign, with the character of Deadpool advertising his own movie in a tongue-in-cheek way, is not possible with the normal X-men, or the Fantastic Four, or really any other character. Hence the brilliance – Deadpool had a distinct advantage in this arena, and fully exploited it.

So, why am I discussing marketing and trailers and other such bullshit with regards to the film itself? Because the character of Deadpool in the film is the same one we see in the marketing materials. Deadpool’s irreverence, foul mouth, and fourth-wall breaking are all set up before we even see the film. In essence, the marketing material can be considered as part of the canon of Deadpool’s story! And, by not taking any of this too seriously, the filmmakers can tell precisely the story that interests them.

That story, as mentioned earlier, is that of Wade Wilson (Ryan Reynolds – Perfect). He’s a mercenary with a heart of gold. Well, not gold . . . maybe . . . bronze? He isn’t that nice – but he seems to target guys who are just a little bit meaner than he. He collects his money in a little dive bar tended by his buddy Weasel (TJ Miller), which is also where he meets the love of his life, Vanessa (Morena Baccarin). The two bond over disgusting tragedies from their pasts which are probably made up, and then participate in a NSFW montage as they celebrate various holidays over the course of the next year. National Women’s Day is a favorite.

Eventually, we get to the cancer and the secret organization with their miraculous mutant treatment. Essentially, the group injects Wade with a serum designed to “awaken latent mutant genes” given sufficient stress – so the bad guys get to stressing Wade with shocks, cold water baths, and just good old-fashioned beatings. Depriving him of oxygen eventually triggers Wilson’s mutations, resulting in the disfigurement and his powerful healing abilities. Wade effects an escape with a little ingenuity, and the remainder of the plot follows his quest for revenge on those who tortured him, who he thinks can cure his disfigurement so that he can be with Vanessa again.

His quest is not a painless one, and there are lots of roadblocks in the way as he punches his way to the truth. A couple of X-Men, Colossus and the newly-introduced Negasonic Teenage Warhead interfere with Deadpool’s first attempt at capturing his quarry, Ajax (real name Francis). Apparently Colossus really wants Deadpool to join the X-Men, which would cramp his style quite severely. Interactions between Deadpool and the X-Men are always hilarious, and portend that a possible crossover might actually be able to work out. As Colossus tries to take Deadpool to see “The Professor”, our merc quips, “McAvoy or Stewart? These time lines are so confusing”.

This is the kind of self-reference and fun-poking that other comic book movies can’t take advantage of. Certainly, things like Iron Man, Ant-Man, Guardians of the Galaxy, and even The Avengers are capable of drawing attention to the strange and ridiculous nature of comics with a particularly tongue-in-cheek tone. Guardians makes fun of its own MacGuffin, for instance. Ant-Man makes fun of the name of his own character, and so on. But, none of them know that they are in a story and that other stories exist to ridicule. Hawkeye telling Scarlett Witch that “We’re fighting robots on a floating city and I have a bow-and-arrow. None of this makes sense” draws attention to the absurdity of The Avengers, sure. But it doesn’t go the final mile and exclaim, “At least Robert Downey isn’t on drugs anymore”. It can’t, it is not that kind of movie! Deadpool most certainly is.

As such, this R-rated masterpiece may actually be the best comics movie qua comics movies ever made. Director Tim Miller, in his first feature film, crafts some amazing action sequences and has a real eye for how to handle Deadpool’s weirdness. Whether that means accidentally sticking his gum to the camera lens, talking directly to the audience, or navigating through the non-linear story structure. Miller is also trusting of his audience. He doesn’t protect us from some of the more grisly torture sequences (which are definitely not fun), and he allows for subtlety in the courtship of Wade and Vanessa while also challenging us with the storytelling – all of which perfectly suits the character of Deadpool (he is also brutal, subtle, and haphazard).

The writers and actors deserve a lot of credit in how the comedy lands as well. Rhett Reese and Paul Wernick are responsible for the screenplay as a whole, and certainly wrote a great deal of the jokes as well. The two were interviewed about the film by Collider here, and they remark about specific jokes quite often, but they also point out that Ryan Reynolds and TJ Miller did their fair share of adlibbing. Wherever the jokes come from, they arrive fast and hit at a remarkable rate. There’s plenty of swearing, childish (and inventive) name-calling, and sex acts being described in detail. As a raunchy comedy alone, Deadpool is on par with the most recent successes of that genre like The Hangover and 21 Jump Street. Then it also has the whole comic book thing going for it.

Deadpool shows us again a tried-and-true method for success: hire people who have passion for their story, and let them do what they want. From the opening credits to the time the post-credits scene is all done, Deadpool is furious entertainment. While its irreverent tone has been adopted before by movies like Super, Kick Ass, or even various Marvel movies to a limited extent, Deadpool is a trailblazing film in terms of the lengths it allows its self-conscious protagonist. Deadpool himself can be said to exist in both the fantasy reality of the comics, and our actual reality overrun by bland superhero films, and by God he is determined to make his mark. This is a unique character and film, and in a single weekend has become the crown jewel of 20th Century Fox’s superhero properties.

Okay, so that’s the end of my review. You probably won’t agree with everything that I say, but that is the nature of opinions. Just go see Deadpool, and we’ll call it even.