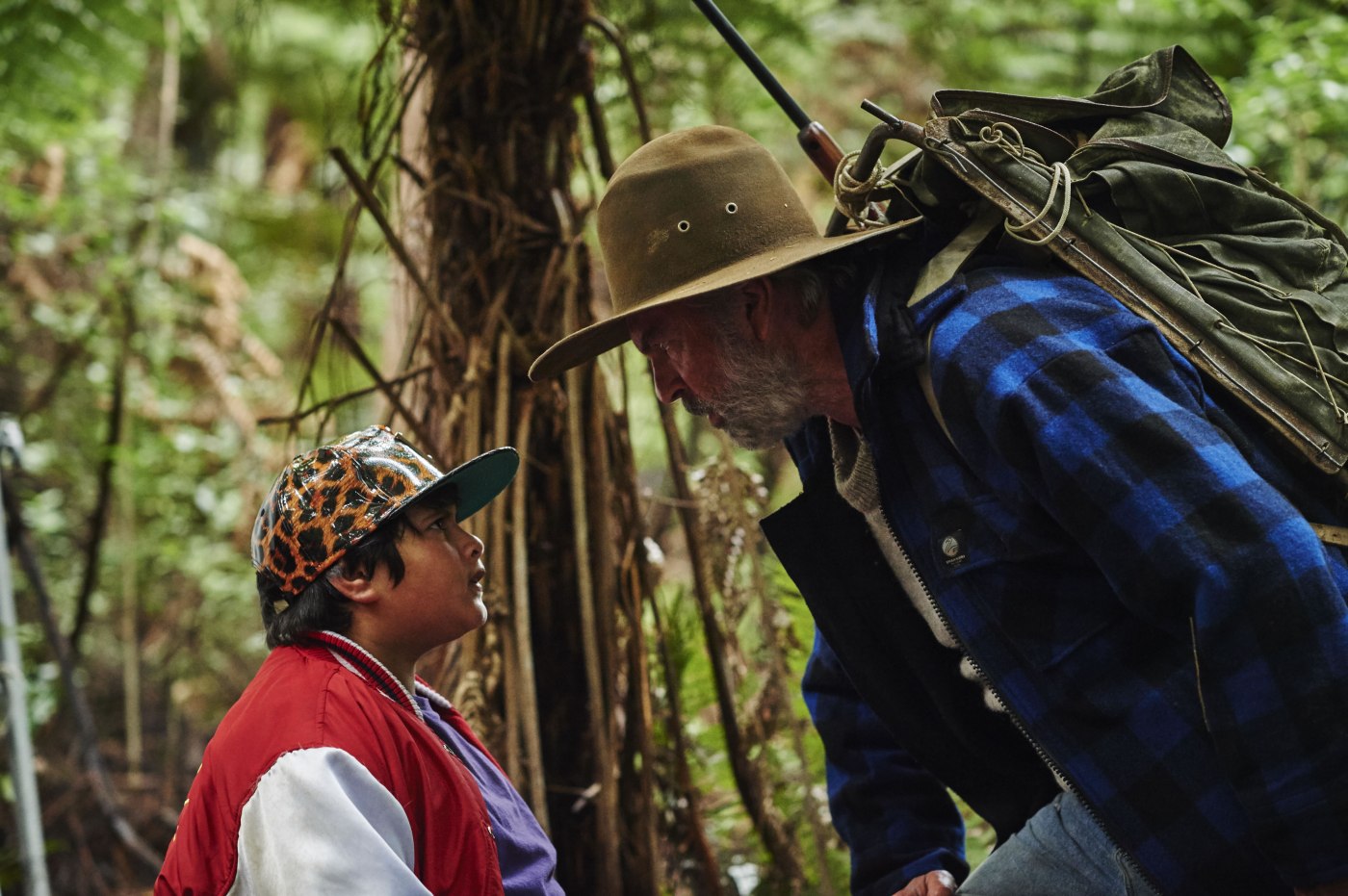 New Zealand director Taika Waititi (pronounced Tie-Ka Why-tee-tee) has created a magnificently funny coming-of-age film in Hunt for the Wilderpeople.  Most known for the HBO series Flight of the Conchords and the mockumentary What We Do in the Shadows, Waititi has also directed more standard narrative-based films like Boy and Eagle vs. Shark.  Hunt for the Wilderpeople falls in this category, as it tells the story of an orphan named Ricky being introduced to a new foster family on the edge of the New Zealand bush.

The film begins with Ricky Baker (Julian Dennison) being delivered to the farm owned by “Aunt” Bella (Rima Te Wiata) by the social worker, Paula (Rachel House).  Ricky is a troubled child, and can’t really get along with anyone due to his behavior (which includes kicking things!).  But, Aunt Bella and her friend “Uncle” Hec (Sam Neill) treat Ricky very well.  Though Ricky tries to run away the very first night, he only makes it about 200 meters before getting tired and falling asleep – so Aunt Bella finds him and invites him back to the house for breakfast.  Bella, Hec, and Ricky work on the farm and begin to form an adorable little family, until something causes Ricky to run away to the bush for good.

In the bush, Ricky does okay, but eventually Uncle Hec finds him and threatens to bring him back to the farm.  The two have a run-in with some other hikers, and learn that the social worker Paula is looking for them, to take Ricky back into the foster system.  They escape, and a nation-wide manhunt for the two “wilderpeople” begins.  The tone is thoroughly farcical, though there are decided moments of sadness, stress, and genuine heart as the two protagonists struggle to survive in the bush and evade those pursuing them.

Sam Neill and Julian Dennison turn in superb performances here.  Neill’s Uncle Hec is a grizzled, forlorn old farm hand who knows his way through the bush and around the barnyard – but understands little else about the world.  He has no family, and struggles with his growing affections for Ricky throughout the film.  And, despite working directly opposite an accomplished actor like Neill, Dennison is likewise magnificent.  He effectively portrays both the pain of the oft-rejected orphan boy and the gleeful exuberance of the 12-year old on a camping trip. Plus, he is very funny, delivering many of the best lines of the film.

When Ricky comes to the farm, he lacks the skills necessary to succeed in both a physical sense and an emotional one.  Hunt for the Wilderpeople is a story of growth, both for Ricky and for Uncle Hec.  Together, they wander through the bush and grow closer together over their shared hardships.  Ricky learns to hunt and shoot, make camp, and navigate.  Uncle Hec learns that it is okay to feel for others, trust in them, and let go of people he has lost.  And this whole trial of emotional growth is set amid a farcical nation-wide manhunt spearheaded by a headstrong social worker.  It is a wonderful film which balances heart and humor with surprising expertise, and establishes Waititi as a mercurial talent in the comedic realm.

Hunt for the Wilderpeople debuted earlier this year at the Sundance Film Festival (and I mentioned wanting to see it in my Sundance retrospective piece!  Mission: Accomplished!).  It has since shown at other film festivals, including SXSW and Sarasota, and debuted in New Zealand on March 31st.  It was a great film to open the Wisconsin Film Festival, and the audience was in stitches throughout.  Hence, some of the rapid-fire jokes were drowned out by laughter, so I am excited by the opportunity to see this one again.  The Orchard has purchased the rights to Hunt, so we can expect a theatrical release at some point, but we don’t know when that will be yet.  Has anyone else been fortunate enough to see this film, or, are you excited for it now after reading this review?  Then, please share this with your buddies who might also enjoy it.  I promise to update this part of the review when I know more about a release date.  What about Taika Waititi?  Have you seen / enjoyed his past films?  Did you know he was directing the third Thor movie Thor: Ragnarok?  Comment below and let me know your thoughts!

5 thoughts on “Taika Waititi’s “Hunt for the Wilderpeople”: A Farcical Coming-of-Age Film with Surprising Heart”