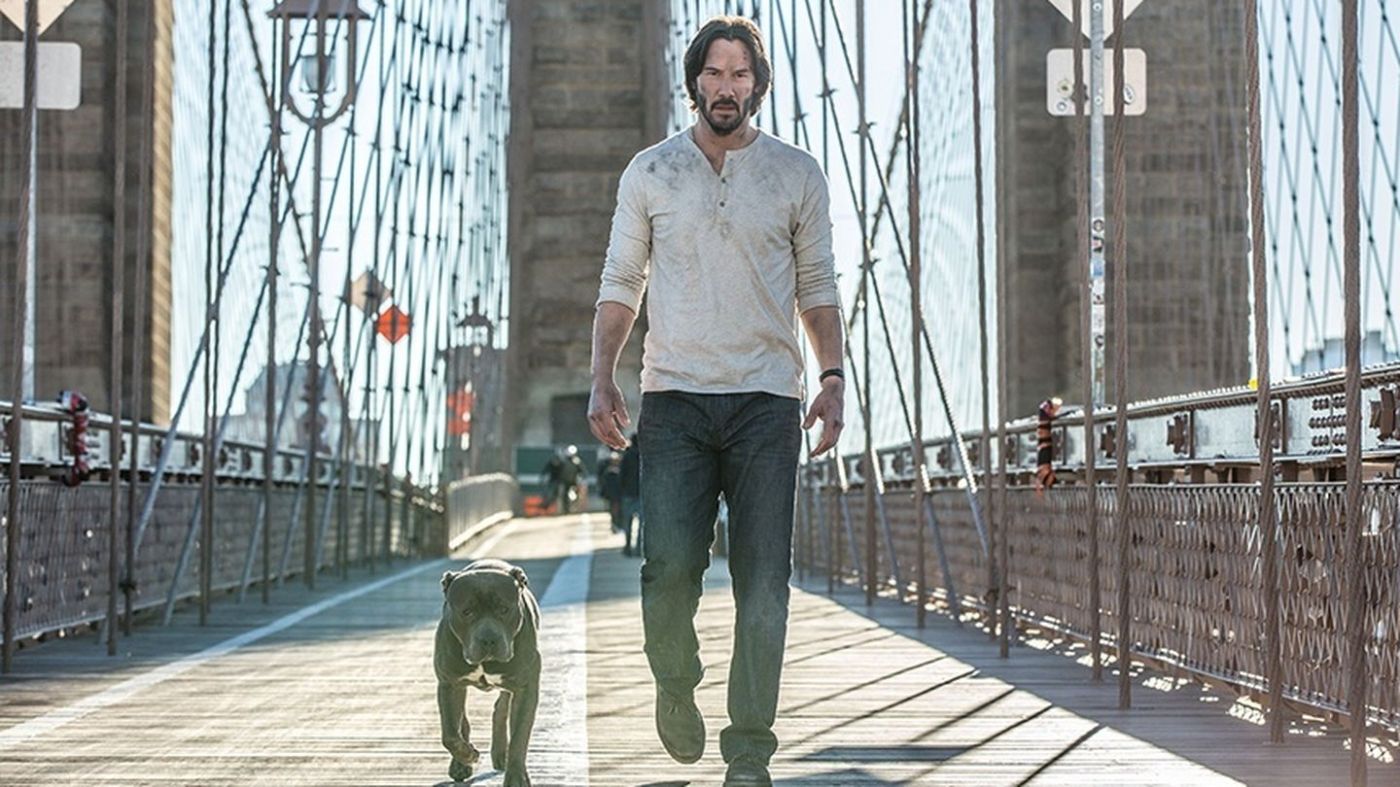 The sequel to the wildly surprising gun-fu action flick John Wick picks up right where the original left off, both in terms of plot and aesthetic.  The signature stylistic elements of the original are all here:  extensive worldbuilding, lengthy camera shots, and heavily-choreographed fight scenes more reliant on stunt work than on CGI.  The sequel extends these elements, but also has some unique ideas as well.  The locations where John Wick fights are far more varied in the sequel, and which not only makes the background more colorful and interesting, but indicates John Wick’s own personal struggle in the film.  John Wick: Chapter 2 is a thoroughly successful continuation of the series, remaining true to the magic of the original, and expanding upon it in intelligent ways.

John Wick:  Chapter 2 opens a few days after the events of the original, with John (Keanu Reeves) visiting his wrath upon the chop shop that ended up with his car. It’s a preamble, and basically exists to jolt the audience back into this underworld.  John triumphs, his car is brutalized, and he makes peace with the owner of the chop shop, a Russian who was the brother of the crime boss from the first film.  With that quick introduction out of the way, the plot elements of the first film are addressed, and from this point forward the film descends into the intricacies of the world that John had tried to escape, but now has been pulled back into.

Writer Derek Kolstad and director Chad Stahelski again show their penchant for streamlined storytelling.  When John returns home, he is visited by a man named Santino D’Antonio (Riccardo Scamarcio).  John Wick owes this man from back in the day, and because Wick appears to be back in the game, D’Antonio has come to collect his favor.  John’s payment is simple:  assassinate a target of D’Antonio’s choosing.  Of course, this is John Wick, so things go a little off-the-rails.

One potential weakness of Chapter 2 is that the film takes a while to develop beyond this point.  The next 30 minutes or so are spent delving deep into the John Wick Universe, and while the expansion of the world is appreciated and entertaining, it halts the momentum of the film slightly.  Where the original held a consistent pace and had a kind of snowballing effect, Chapter 2 is a bit start-and-stop.  Regardless, once Wick is set on his quarry, the story progresses well with a number of visually appealing scenes, fascinating fight sequences, and some fun surprises.

The visual style of John Wick:  Chapter 2 relies on longer shots and in-camera stunts and special effects, much like the original.  But this iteration dials it up to 11.  The camera does a reasonable amount of moving through the gun-fu action, but it isn’t shaky or obsessed with quick cutting as a means of manufacturing energy.  The energy is all on the screen.  The shots during the action probably average between four and five seconds long, an eternity in today’s action movie landscape.  This lends the fights a realism, even as John Wick performs outrageous feats.  It also makes the action easier to follow, and the filmmakers add some other flares to help the spectator even more.

For instance, in a fight that takes place in the catacombs of Rome, the baddies all wield large flashlights.  In practice, this allows us to identify them in the darkness, but it also allows us to comprehend all the action – where the assailants come from, where John is shooting, and the outcome of the attacks.  As the assailants go down, the beams waver, and as John administers headshots, the lights fall to the floor and stop moving.  It’s an ingenious way to communicate a fight in the dark visually.

Fights also take place among a diverse selection of settings.  The first big fight is in the catacombs, dark and dirty and ancient.  The last is in a modern art museum, which moves from a sparse and pristine gallery into a mind-bending house of mirrors exhibit to the self.  The backgrounds, and their progression, could work as metaphor for John Wick’s journey out of the past and into the future, especially in consideration of his own identity and the person he chooses to be at the end of the film.  Even if these rhetorical interpretations are too farfetched, one can’t deny that the variety keeps the fighting incredibly entertaining, and especially attractive to look at.

John Wick:  Chapter 2 does everything that you want an action sequel to do.  It expands upon the world of the first with new characters and locations, while remaining true to the tone and aesthetic.  It reveals more of John Wick’s story, while simultaneously giving him real choices and places to grow.  Though it sports less-even pacing than the original, once it gets going the momentum is unabated until a tense and laconic climax that literally elicited gasps in the theater.  And, in perhaps the most impressive turn of all, John Wick: Chapter 3 is left right on the table at the end of the film, as both the logical continuation of the story and its novelty are crystal clear.  In an environment saturated with cynical and cash-grabby action flicks, the John Wick series already stands out as an exemplary franchise – and promised even more to come.

2 thoughts on ““John Wick: Chapter 2” Honors the Original and Extends Its Aesthetic to New Heights”