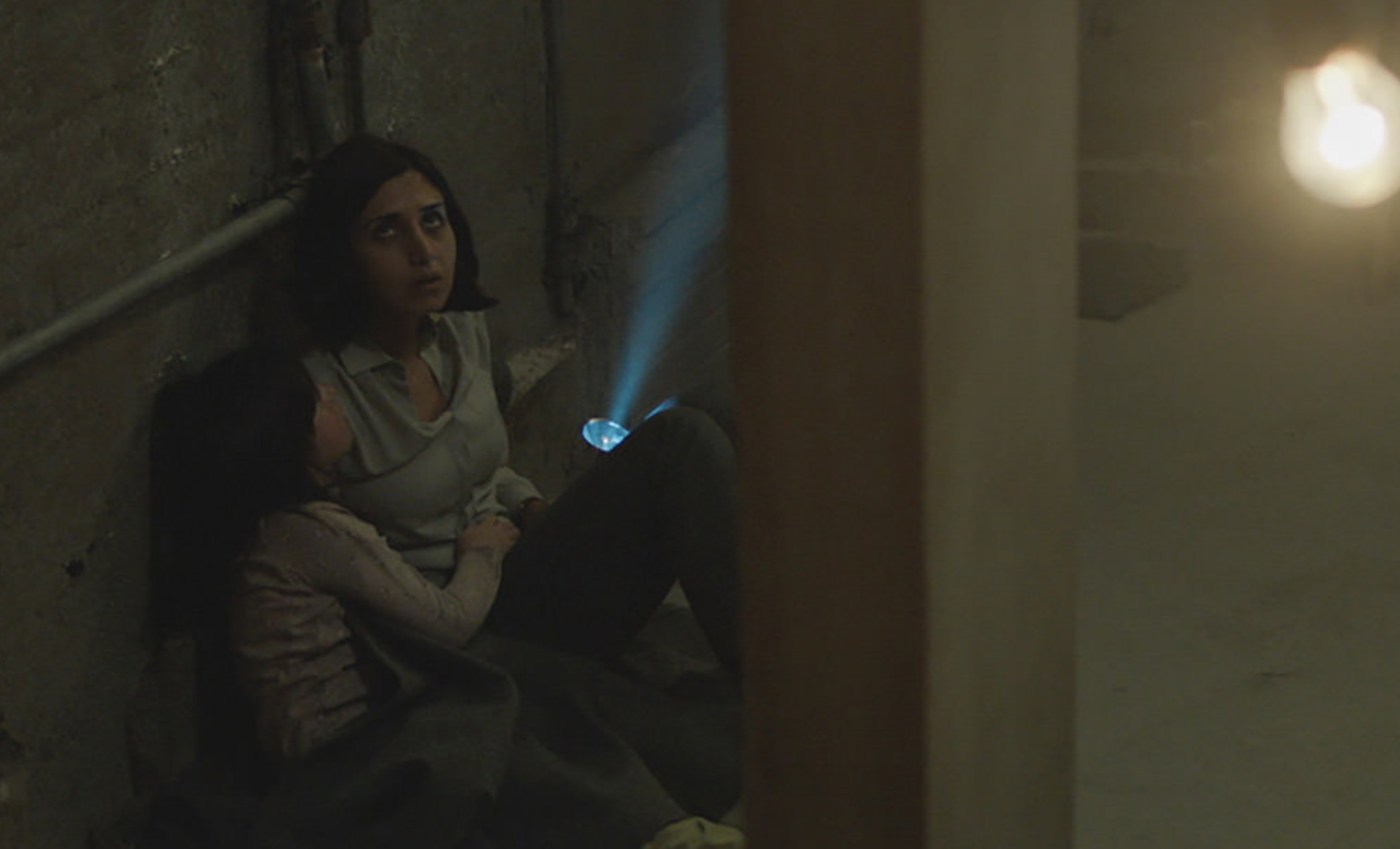 And the jinn we created before from scorching fire.
– Quran 15:27 “The Rocky Tract”

Symbolism and metaphor are powerful weapons against oppression, and can also illuminate complex and unbearable situations like war and the subjugation of women.  Writer-director Babak Anvari’s debut feature Under the Shadow is a intelligent film that takes full advantage of the setting, situation, and culture of Iran in the 1980’s to spin a terrifying supernatural horror film.  Among the background of the Iran-Iraq war, the film depicts a woman and her young daughter as Tehran is bombed and a nefarious Jinn takes residence in their apartment building.  Though a supernatural horror film on the surface, Under the Shadow also boasts a rich subtext that explores ideas of misogyny, family struggles, and the gloom of wartime.

The movie is pregnant with ideas and hidden themes, but it also boasts astounding technique.  The performances are impeccable, especially from lead actor Narges Rashidi.  The camerawork keeps every sequence interesting and ha some interesting tricks that you don’t see very often, used here to confuse or disorient the audience.  The framing and general color palette of the film, especially the use of darkness and shadow, also contributes to the quality and mystique.  The marriage of these stylistic choices, the overall plot of the film, and the thematic underpinnings truly make Under the Shadow something wonderful to experience.

Under the Shadow goes down many culs-de-sac on its journey, but the major through-line is pretty simple.  During the Iran-Iraq War, Shideh (Narges Rashidi) attempts to return to university where she was studying to be a doctor before she left to participate in leftist political activism.  Because of that – and likely also because she’s a woman – she is denied this opportunity.  Back home, her husband Iraj (Bobby Naderi) lacks any real empathy, and her daughter Dorsa (Alvin Manshadi) carries around a doll and makes up stories about Jinn, Genie-like spirits mentioned in the Koran.  As the war heightens, Iraj is called to the front for his medical skills, and Shideh must take care of Dorsa alone as the shelling intensifies and the Jinn transitions from a spooky story into a disturbing reality.  There’s also a unique “Ten Little Indians” dynamic at work here, as Shideh’s neighbors leave the complex one by one, eventually leaving her and Dorma alone.

The characterization in Under the Shadow abolishes any language barrier.  Keen choices from Anvari convey the prickliness of Shideh and Iraj’s relationship early on, and the same techniques are applied to Shideh’s interactions with other denizens of the apartment building.  But the bulk of the credit belongs to Narges Rashidi, who is simply a revelation.  Throughout the film, her feelings, motivations, and thoughts dance across her face.  Her eyes convey the unfairness of her situation and the dawning realization of the oppressive horror encroaching on her home.  There are reasonable performances throughout the film, but Rashidi is an unblemished paragon.  The film earns a recommendation on this single aspect alone, but it has much more to offer.

The cinematography bestows an unsettling feel to the film, both through intelligent compositions and inventive camerawork.  Characters are often isolated in the mid-background of a shot, looking incredibly small and lost in their surroundings.  What’s worse – this is the same area of the screen that seems to birth the most horrific entities in the film.  Early on, Shideh is pleading  to return to university, with a wide window separating her and the dean.  As her aspirations are stymied, a missile explodes in the background.  The intention is clear:  this is a world where her dreams are under assault – but so is her life.  This closes off the world for Shideh.  She not only has to worry about the current oppression that envelops her, but also the distant dangers that could literally end her life.  Other evils, including the Jinn, are also framed in this manner, as a harbinger of the inevitability and inescapability of evil.

The framing is awesome, but the camera movement is an another level.  There are sequences where the entire camera rotates 90 degrees, wobbles around as Shideh struggles to comprehend what is happening out in the dark, and the rotates back.  The dance imbues entire sequences with a nervousness, confusing the spectator and putting them on edge.  There are also long tracking shots as Shideh and Dorsa run through the apartment complex in the dark, simultaneously lengthening the distance that it feels they need to go to escape, and closing the world in around them.  It’s a spooky atmosphere, and one that always toys with comprehension.  Not a bad choice for a trickster like the Jinn.

On top of all of these magnificent technical successes, Under the Shadow also sports some great symbolism and metaphor (like the very best horror flicks).  The most clear is the use of Shideh’s Hijab / Chador as a symbol of oppression.  Though it is required of her, she is quick to remove it whenever she is in the apartment  – and even sometimes when she is not.  This is slammed home in a sequence where she is caught not wearing it, after running out of the house from the Jinn.  A local official reminds her, “A woman should be scared of exposing herself more than anything else.”  Not murderous Jinn, or haphazard missiles, or her daughter losing trust in her.  Showing her face in public without a headscarf.  This metaphor is extended in the final act of the film, where the Jinn is represented by a chador flying around on its own.

The Jinn is also characterized as an omnipresent force of evil that is born from the surrounding turmoil of wartime.  Bombs, missiles, and war could easily be seen as progenitors of the Jinn, the evil spirit.  Not only does the Quran refer to the Jinn as being “created from scorching fire”, but most serious events involving the Jinn occur during or immediately after bombings  and the resulting warning sirens.  Thus, the Jinn becomes not just a faceless boogeyman assaulting Shideh and Dorma for no reason, but a spiritual representation of the horrors of indiscriminate urban warfare, horrors which will endure so long as Iran and Iraq are at war.

With such juicy symbolism and a weighty subject matter, the themes of Under the Shadow are plentiful.  There are discussions on lost dreams and paused ambition, and the wayward life thrust upon Shideh as a woman and ideologue.  Related to all of this, there are also hints that Shideh fears that she is a poor mother, incapable of caring for Dorma.  Then, in the grander scope of the story, there are all the ideas about the  Jinn as the expression of the horrors of wartime, and how hard it can be to make a rational decision amid the confusion and uncertainty of such times.   There are minor themes too:  familial strife, isolation and loneliness, especially in light of the death of a recent friend or family member, and the seeding and growth of distrust in light of a betrayal.  Even after typing 1400 words, I feel like this film begs to be revisited.

Under the Shadow compares very well to other recent horror films.  The Babadook has a similar family dynamic at play though that film is probably scarier;  Under the Shadow is more allegorical and likely more thematically rich.  This allows some comparison to Get Out, in that it uses the horror genre tropes as allegory for greater societal forces – in this case Sharia Law and Wartime.  A Girl Walks Home Alone at Night also re-purposes the chador, is in Farsi, and is a supernatural horror modeled around a pro-women message with pretty cinematography. Persepolis deals with a similar time period and setting, but is much more focused on the post-revolutionary aspects of Iran, and less on the War per se (and obviously, is animated, and not a horror film).  All-told, Under the Shadow is a peer of all of these high-quality films.

Under the Shadow is an absolute slam-dunk.  It has the perfect mix of scariness, social commentary, allegory, metaphor, and story.  The performance from Narges Rashidi is special, and the practiced camerawork keeps the audience on edge as the tension and the terror builds.   This is a powerful film about another culture, war, oppression, and an environment flush with fear.  If you enjoy off-beat and well-made horror rich with allegory and metaphor, then Under the Shadow should leap to the top of your Netflix queue.