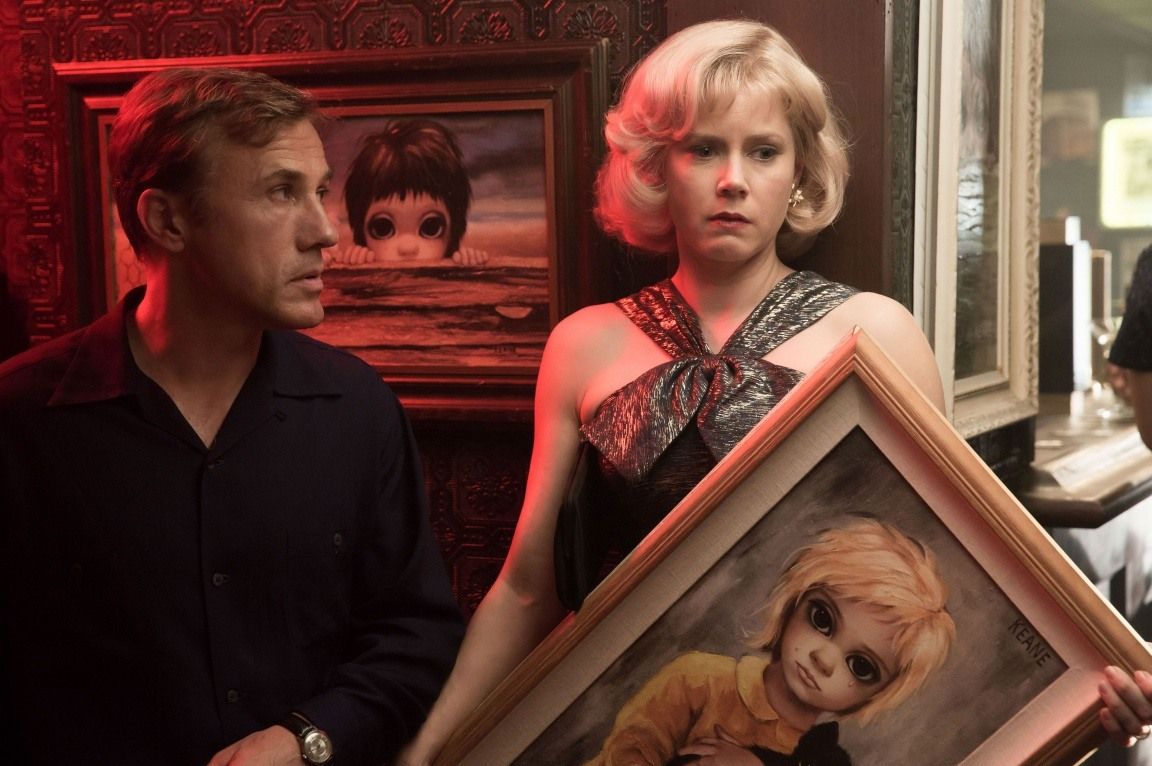 There is a superficial idea championed by some movies that dishonesty sells.  Heist films like Hell or High Water or Ocean’s Eleven suggest that a caper can handsomely reward the protagonist, if it’s properly executed.  White lies can tell a person, “exactly what they need to hear” as a plot contrivance for furthering a character’s confidence, like Neo in The Matrix.  And even films that deride dishonesty often do so by showcasing the extreme fall that accompanies an ill-gotten rise, even though the character doesn’t necessarily need to consider their lies to be a transgression at all;  think The Wolf of Wall Street, Catch Me if You Can, or other examples of hubris-infused justice.  Rare is the film that showcases the psychological destruction that a lie can wreak on a person’s life.  Tim Burton’s Big Eyes is a fascinating exploration of precisely that idea.

Big Eyes is something that I thought I would never see again: a Tim Burton passion project where he chooses not to adorn Johnny Depp with weird hats!  Writers Scott Alexander and Larry Karaszewski  (the team behind Ed Wood and Man on the Moon) penned the screenplay, which is based on the life story of Margaret Keane, the famed artist behind the “big-eyed waif” paintings (see below).  But the emotional crux of the film relies on a central fabrication:  for years, Margaret and her second husband Walter claimed that it was Walter who produced the paintings.

The film stars Amy Adams as Margaret and Christoph Waltz as Walter, and both actors deliver powerful performances wrought with nuance.  The film begins with Margaret leaving her first husband and bringing her daughter to San Francisco to start a new life.  There she meets Walter, who is an aspiring artist himself, has a penchant for marketing, and offers respite from the miseries of her past.  He uses his wiles to display their art at a local eatery, but when Margaret’s pieces prove more popular, he is quick to take credit for them.  When Margaret catches him in this lie, he argues that buyers would balk at purchasing a painting from a woman.  In a heart-breaking turn, Margaret agrees with him, and the ruse is on.

As her paintings do the 1960’s version of “going viral”, Margaret must keep their true authorship from everyone in her life, including her young daughter.  This dishonesty weighs her down, sapping her strength and resistance.    Soon, the artistic success that should have brought her happiness is transmuted into shame.  Her entire life is sucked of color and joy, and she is reduced to a heartless robot churning out “Big Eyes” 16 hours a day, while Walter schmoozes with celebrities and takes all the credit.  Adams is exemplary here, and her melancholy performance as Margaret compares favorably to her most-storied roles, including those that earned her Oscar nominations.

Walter is fascinating as a con artist, primarily motivated by his desire of the unearned.  He reeks of envy and artifice throughout the film, upset that he does not have Margaret’s gift, yet constantly performing as if he does.  And though conflict grows between him and Margaret, the two share similar story arcs.  Just like his wife, Walter’s dishonesty undermines his emotional equilibrium.  One need only consider how he responds to poor reviews from art critics or perceived slights against his talent to recognize that his mind is a fragile thing.  Thus, when Margaret stands up to him, as only she can, his response is to browbeat and intimidate her into compliance, sometimes through physical force.  Waltz walks this knife’s edge perfectly, flush with charisma at one moment and exploding in rage the next.

This is the nature of true dishonesty, the effect of living one’s life contrary to reality.  Like Margaret, all of one’s values become embarrassments, triumphs become fear, and relationships become facile simulacra.  The primary emotion in one’s life becomes fear because everything is built on a shaky foundation of lies.  That foundation is in constant jeopardy, as its collapse will permeate one’s entire life.  These emotions dominate, regardless of whether or not the lie is discovered.  Dishonesty is a poison that can only harm, even if the truth is never revealed.  And it will be.

The overwhelming strength of Big Eyes is its flawless and focused execution of this single theme.  The characters are reasonable, the performances strong, and the overall plot rewarding, but these all play second fiddle to the uncommon and brilliant treatment of the effects of dishonesty.  The strongest character moments reveal the damage of the lie.  The best performance scenes portray the descent into misery that accompanies such a fiction.  And the strength of the plot derives mostly from Margaret’s internal conflict and the catharsis of lifting this unfathomable weight from her soul.  Big Eyes received little fanfare upon its release, but the film is of high quality and especially impresses as a thought experiment in ethics.

Big Eyes came to my attention through Leonard Maltin’s podcast during an interview with Amy Adams.  Fortunately, the film is on Netflix, and found myself enamored with the story and its themes.  Have you seen Big Eyes?  What did you think?  What’s an example of a film that you stumbled across on a streaming service that surprised you?  Let me know in the comments!