“Spider-Man: Homecoming” Does Whatever a Spider Can to Be Unique and Fun

Though he has only a pair of independent films to his name, director Jon Watts (Clown, Cop Car) sure knows his way around a friendly neighborhood Spider-man.  The product of a team-up between Sony and Marvel Studios, Spider-man: Homecoming places the iconic webslinger in high school.  This choice dictates many aspects of the film, from the story and characters all the way down to the sense of humor and the overarching themes of growing into one’s responsibilities.  At the very least, it certainly establishes Watts’s version of Spider-man as different, which is absolutely crucial given that this is the third iteration of Peter Parker in the last 15 years.

The film stars Tom Holland as the sophomore-aged superhero, who we first met during Captain America: Civil War.  This film takes place a few months later, though we get a fairly ridiculous ret-con reminder of the events of Civil War from Spidey’s perspective.  This film finds Peter Parker meandering through his daily routine at school, only to gallivant through the streets of Queens looking for crooks to foil.  Aunt May (Marissa Tomei) is also back, but the rest of the cast is new.

This being high school, there’s lots of faces and moving parts.  Peter’s best friend Ned (Jacob Batalon) is wonderful comic support, and has a great introduction (which is later reprised for another character).  Tony Revolori (The Grand Budapest Hotel) is the smarmy competition, Flash, and there’s also Laura Harrier as the romantic interest Liz and Zendaya as the unique rebel Michelle.  Michael Keaton completes the irony of Birdman by bringing life to the villainous Vulture, while Robert Downey Jr. and Jon Favreau reprise their roles from the MCU.  Fans of Martin Starr, Donald Glover, and Hannibal Burress will enjoy their respective cameos.

The narrative gains from the choice to make Peter Parker only 15 years old completely permeate the story.  First, it firmly establishes the naïveté of Peter, and makes his inexperience and teenage bravado crystal clear.  This characteristic manifests in both major arenas of his life, the scholastic and the superheroic. Peter is smart and capable, but shy and tongue-tied around his crush and a little too green for the streets, though neither is for lack of trying.  This youth also allows the film to portray the broad contrast between everyday life and the life of a superhero in a way that few comic book films from this generation are able to do.  Go down the full list and you’ll not find a story that explores this contrast more pointedly than Spider-man; most other Marvel films take superheroism and fame/notoriety as givens.  Spider-man delves into this conflict thoroughly, and stands out from the crowd. 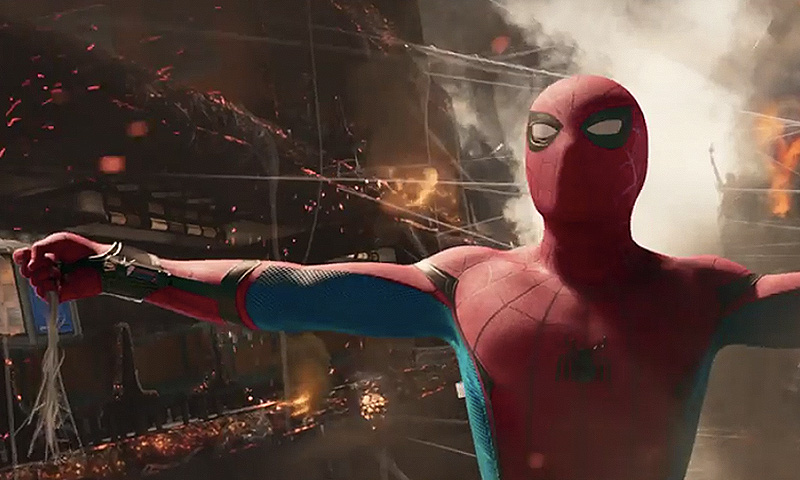 Armed with this idea, the film stays fairly simple in terms of the plot.  Peter wants to become a full-fledged Avenger, so he tries cutting his teeth to impress Tony Stark by hunting down an arms dealer trading in advanced weaponry developed from discarded alien technology way back from the first Avengers film.  Meanwhile, he’s also trying to keep his identity as Spider-man secret and navigate the vicious undertows of high school:  girls, bullies, and extracurriculars.  Each portion of Peter’s story allows for some strong set pieces, whether he is chasing the arms dealers through the suburbs or on the Staten Island Ferry, or visiting Washington, D.C. with his classmates for a quiz competition.

These ideas also inform the themes of the film, which delve deeper into the idea of becoming a superhero more than any previous Spider-man film.  What’s more impressive, this is all with only a single throwaway line as anything that resembles an “origin story”.  The secret identity, friends-and-family stuff, and “Power/Responsibility” bromides are obviously well-traveled in the world of Spider-man, so it is refreshing seeing a more advanced and nuanced exploration of these ideas in this film.  There’s impressive unification of plot and theme here, as Peter’s exploits in these different arenas collide in some unexpected ways.

The comedy of the film is a good mix of self-reference, irony, and the kind of sarcasm championed by the progenitor of the MCU, Ironman.  The pop-culture references are kept sparse, but they are still there and may perturb a few people.  There’s a lot of comedy fueled by dramatic irony, but that is in step with the governing aspect of the film, so it makes perfect sense.  The sarcasm is welcome, but runs the risk of reminding too much of stalwarts of the MCU.  Still, there are many laugh-out-loud moments throughout the film, and they aren’t all one-liners or quips; there’s a number of sight-gags and other visual jokes as well.

Speaking of sight:  sometimes the CGI looks just fine, and sometimes it is a little distracting.  Mostly, this happens when Spider-man is jumping off in the distance, just beyond the midground.  The animation is just too sleek or shiny or fluid or something, and it looks off somehow.  It was most noticeable to me at the very beginning of the film, but popped up a couple more times.

Similarly, as strong as Spider-man: Homecoming is, one does get the feeling that the film leans heavily on both the style and the presence of Tony Stark and Ironman, and not just with the comedy.  Key narrative beats rely completely on Ironman (and to a lesser extent, his right-hand man played by Favreau).  The film even drags out Pepper Potts for the finale.  I do appreciate the mentor/mentee relationship that Tony shares with Peter, but at times it feels a little too absolute.  I would not be surprised if the heavy inclusion of these characters was a proviso from Marvel.

Still, these are minor flaws.  The majority of Spider-man: Homecoming is completely pleasurable fun, with some solid dramatic weight added for good measure.  We get a great introduction to a new version of Peter Parker, and it isn’t weighed down with an origin story.  The key conflict between a life of heroic crime fighting and routine high school drama allows the film to explore many facets of Spider-man and Peter Parker, and really ties the film together with a coherence that few superhero films can equal.  In a year of several solid superhero films, Jon Watts may just have the most fun and accessible of the bunch.